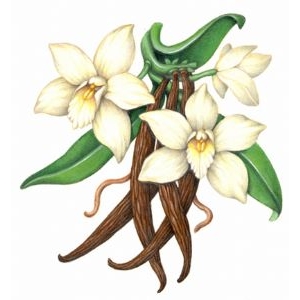 I sat down at the computer this morning to check my news feeds and one headline jumped out at me: There’s a big, world-wide Vanilla shortage in progress and its effects will touch us all, even in ways that may not be immediately apparent. Prepare to shell out big bucks for the real thing. 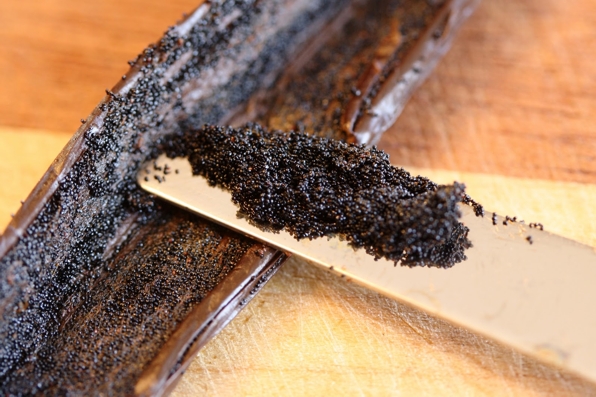 The Good Stuff: Most of Vanilla’s rich, aromatic flavour comes from the sticky, black seeds
in the pod’s centre. But don’t throw the pods away! Put scraped-out pods in a
1 pint / half-litre preserving jar 3/4 full of plain white sugar to extract more
goodness. Or make your own Vanilla Extract!

Eighty-five percent of the world’s real, natural vanilla is produced in Madagascar. So, when that island nation suffers a 50 per cent crop failure, it’s big news for the whole world. Vanilla has doubled in price over the past year, at the wholesale level. That means it will cost at least that much more at retail. Why the fuss?

Vanilla is sometimes referred to as the ‘Salt and Pepper’ of the baking world. It’s used in almost all sweet baked goods to complement and bring out the flavour of the other ingredients. In short, Vanilla is amazing. As a Chef and home cook, I use it in many ways, not the least of which is to ‘season’ cookies and cakes. I also add a little whenever I’m using Chocolate in anything, because it actually makes the dish more chocolatey. And you don’t need to add so much sugar to get the same sweet-chocolate rush.

Vanilla is already one of the most costly ‘spices’ on Earth. And it would take some further shortages before its price began to catch up with Saffron, at about (US)$60 per ounce. And I, for one, will keep buying it and using it. A little goes a long way.

Now, there’s also Artificial Vanilla extract out there. I don’t like the stuff at all. It has all the basic favour components of real Vanilla, but none of the nuances and overtones – none of the richness – of the real thing. Based on random inspection of various processed baked goods’ labels, I suspect that most big  food processors and manufacturers have already moved to the Artificial stuff because of cost.

Just leave the Vanilla out?

You can’t just leave the Vanilla out of your fave recipes, either. The result is just not the same. And no other ingredient has the same effect of rousing the taste buds.

Grin and bear it. Maybe next year Madagascar will have a bumper crop and the price will go down, again.The commodity market for Vanilla can’t withstand prolonged high prices, and it’s just a matter of time before science finds something cheaper and more available as a substitute. How about a Vanilla variety that can grow in colder climates? How about planting more of it in Mexico, where most of the remaining 15 per cent of our vanilla comes from?

We’ll be keeping a really close watch on this issue…