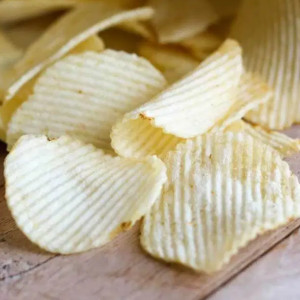 Street Food Discoveries: Why Not Include Potato Chips?

While I was researching yesterday’s Musings post, I ran across a History Of The Invention Of The Potato Chip. It came up on the first page of returns for a Google search that was otherwise waist-deep in ‘Street Food’ territory… 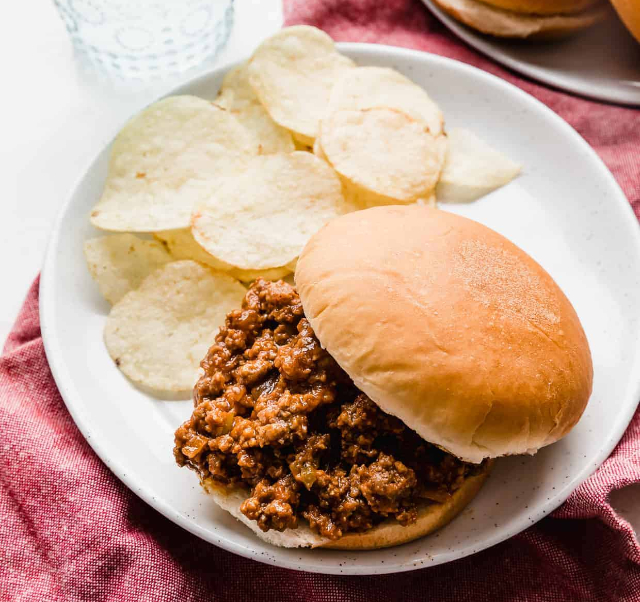 An all-American classic: Sloppy Joes with Potato Chips on the side…

Potato Chips as Street Food? Why Not? I mean who hasn’t, at one time or other, strolled down the street with an open bag of chips in their hand? I know most of us think of chips as belonging in the Junk Food universe. But the History post reveals its roots are in the sit-down resto, and its predecessors are fried potato dishes such as home fries and french fries.

A little of that history…

There’s a swarm of similar stories surrounding the ‘invention ‘ of the potato chip. The popular story is that millionaire Cornelius Vanderbilt, who loved the resort Saratoga Springs, ordered a poultry dish at Moon’s Lake House in 1853. But he complained to the kitchen that the fried potatoes were too thick. He was looking for more crunch. So the chef, one Georger ‘Crumb’ Speck sliced the replacement batch so thin they crisped up all the way through. One extreme to another. This is one example of what happens when you play ‘challenge the chef’. A common variant today is the wing sauce thing, where you say the wings aren’t spicy enough and the next batch leaves you choking for air.

But the legend goes, Vanderbilt loved the ‘chips’. And the rest is history. Trouble is, that story, which spread far and wide, is a myth.

A 2017 story by April White at JStore.org reveals: “In almost all its particulars, the story of George Crum’s deep-fried stunt is wrong. Cornelius Vanderbilt is falsely accused of being the difficult customer; in fact, he spent that summer touring Europe with his family (though he did frequent Saratoga). The Moons, who play a small but instrumental role in the story, did not purchase the Lake House until 1854. And, most importantly, crispy fried potatoes were not new to Saratoga in the summer of 1853.”

According to smithsonianmag.com, ” The earliest known recipe for chips dates to 1817, when an English doctor named William Kitchiner published The Cook’s Oracle, a cookbook that included a recipe for ‘potatoes fried in slices or shavings’. And in July 1849, four years before Crum supposedly dissed Vanderbilt, a New York Herald reporter noted the work of ‘Eliza’, also, curiously, a cook in Saratoga Springs, whose ‘potato frying reputation’ had become ‘one of the prominent matters of remark at Saratoga’.

Which raises another question…

How did a dish like potato chips, which started out as a fancy luxury, become a ubiquitous poster dish for the junk food of today?

In 1895 Ohio entrepreneur William Tappenden started deliverikng them to general stores and other outlets in barrels to local markets. That set off a war among copy-cat chip marketers.

Then, in 1926, Laura Scudder, California businesswoman, started packaging chips in wax-paper bags that included a ‘freshness’ date and a cheeky boast — ‘The Noisiest Chips in the World’.

The potato chip caught on wherever it was introduced. By 1961, the potato chip began to catch the attention of newly emerging national food companies. The first national Chip name was Lay’s, which baited its customers with the challenge, “Betcha can’t eat just one.”

Which brings us to the present

“Americans today consume about 1.85 billion pounds of potato chips annually, or around 6.6 pounds per person.” smithsonianmag.com summarizes. “The U.S. potato chip market—just potato chips, never mind tortilla chips or cheese puffs or pretzels—is estimated at $10.5 billion. And while chips and other starchy indulgences have long been criticized for playing a role in health conditions such as obesity and hypertension, the snack industry has cleaned up its act to some extent, cooking up options with less fat and sodium, from sweet potato chips with sea salt to taro chips to red lentil crisps with tomato and basil.”

The notion that chips were created from regular thick-cut fried potatoes is not so far fetched, though. Even today, they appear in sit-down restos as a side with sandwiches, burgers, dogs an other dishes.

Which just ads more cred to my suggestion that the lowly potato chip be accorded ‘Street Food’ status!