We’ve long had a quantitative handle on how good or bad for us packaged and processed foods are for our bodies. It’s led to prominent posting ingredient lists and nutrition ‘ratings’ on packages. Enviro-labelling may be next… 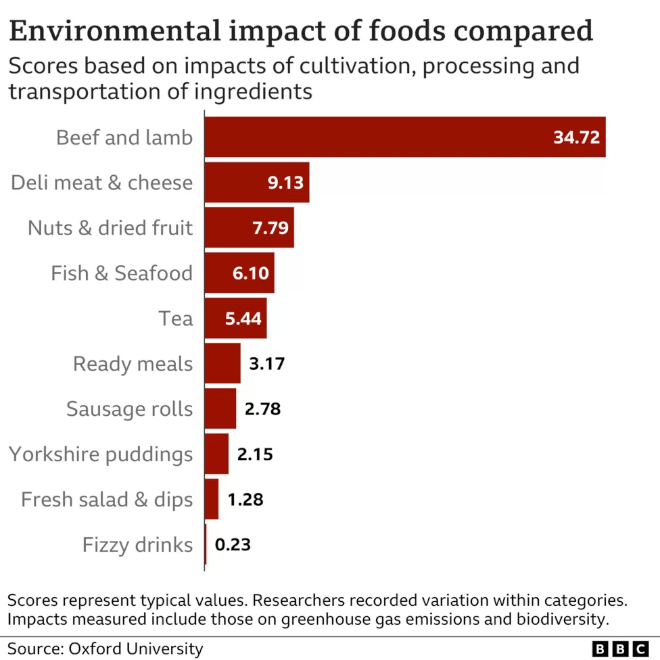 Researchers at Oxford University have completed a mammoth exercise in data mining that has produced a tool to calculate the environmental impact of processed foods.

According to a recent BBC article: “The Oxford team estimated the composition of 57,000 foods and drinks in supermarkets in the UK and Ireland. It then assessed the impact of growing methods, processing and transport, against key environmental measures including greenhouse gas emissions and impacts on nature. […] The team developed an algorithm to calculate an eco-score for the environmental impact of individual food and drink products.”

They found, basically, that it was possible to put reliable quantitative values on the heretofore subjective impacts of production, transportation and sale of packaged, processed foods.

Among their key findings:

For sure, there’s no clear correlation between the enviro-impact and healthfullness of foods. A finding that will make some folks question their earlier perceptions of ‘healthy’ and ‘unhealthy’ foods, when they take the environmental factors into account.

Using the Oxford algorithm, manufacturers can now tweak their recipes to lower the overall environmental impacts of their products.

Consumers can now gauge the relative impacts of one type or brand of (say) sausage against another.

The BBC story stresses, “The researchers don’t foresee [enviro-labelling] becoming compulsory in the near future. They want firms to adopt it voluntarily, something they believe would lead them to compete over the sustainability of their food and drink products.” The voluntary approach has not worked well in the past when business and industry decided it was going to cost them too much money, time or effort to comply. We’ll see.

Prof Peter Scarborough of Oxford University told BBC News: “The food industry has also been, ‘crying out’ for the new tool and that the algorithm is already being used by some manufacturers and caterers. “It fills a huge gap. Manufacturers, caterers and retailers have targets for reaching net zero [emissions] and they don’t have the tools they need to get there.”

And that’s all good.

Even though the potential for making important impacts on the environmental crisis is clear, it remains to be seen whether industry will embrace the new tool it has been given.

And let’s not forget the environmental impacts of power generation, automobiles and other major activities. They still far outweight that of agriculture in the big picture. Let’s get working, in earnest, on those, too.