Poutine ‘Evolving’ at an Astonishing Rate!

When you think ‘Canadian’ food, there are only a few menu items that come to mind as genuine Canadian inventions. One of the first, of course, is Poutine. But I recently read somewhere that Poutine is ‘evolving’ and some food-forward philosophers are seriously asking, how far can you ‘evolve’ the dish before it becomes something else? 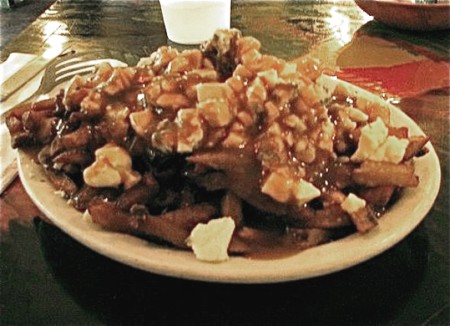 Classic Poutine is an unlikely combination of French Fries, Diner-style Brown Gravy and Cheddar Cheese Curd. There are many stories about how it was invented, but the one I find most pleasing (and the one that rings truest, in my ears) is the tale of Warwick, PQ, diner operator Fernand Lachance. Seems he was minding his own business, literally, one day in 1957 when a customer noticed a display of little bags of Cheddar Cheese Curds from the local cheese factory on the counter and said, basically, “How about putting some of those on my Fries and Gravy?”

Lachance thought about it a minute and replied, “Ça va faire une maudite poutine!” (“That’s gonna make one damned awful mess!”) But he did it and a legend was born. Check out my definitive post on Poutine for all the nitty-greasy details on how to make it right! (Yes. I cribbed extensively from it to create the previous paragraph…)

Yes, Poutine is a mess. But it’s our national mess and we love it. The question is, how far can one take the recipe from its humble roots and still call it Poutine?

Ten years ago, I went to a restaurant here in my town which boasted that it served something like a dozen kinds of Poutine. I had the Fried Onion and Jalapeño. Pretty good! As I recall, other variations included Fajita (sizzled Beef strips added on top), Shrimp, and Tofu.

But there are those who credit the evolution of Poutine in Fine Dining circles to Montreal Chef Chuck Hughes who started serving some far-our creations under the sacred name by adding some cooked lobster to the mix. Now, it seems, you can get pretty much anything you can imagine on top of your Fries, Gravy and Curds. There are many opinions on what constitutes genuine Poutine and what, on the other hand, is merely homage to the Poutine Concept.

One issue that the self-styles experts do not talk about, however, is the Cheese Situation.

Most do agree that, if it doesn’t have the Fries, the Gravy and the Cheese – whatever else you put on it – it’s not real Poutine.

I think it’s important to differentiate between ‘Cheese’ and ‘Cheese Sauce’ and ‘Cheddar versus other Cheeses’. There are those who would adulterate Poutine by topping it with Melted Gruyere or Fontina instead of Cheddar. Don’t even think about Process or ‘American’ cheese. Sorry, but that that’s French Fry Fondue, not Poutine. Not just because it isn’t real Cheddar, but because it’s Sauce, not fresh Curds. Totally un-Poutine texture!

And if I had dollar for every time I’ve seen ‘poutine’ served with melted Cheddar Cheese (usually that pale imitation, Process, or ‘American’, Cheese) rather than real Curds, I could retire. Offhand comment: The slimy mix of Gravy and Crappy/Fake Cheese Sauce just doesn’t read, to the eye or the palate, as Poutine at all!

Personally, I don’t care what you put on it, as long as your Poutine has the Fries, the Curds and that good old Diner-style Brown Gravy. Just make sure that whatever you add ‘goes with’!