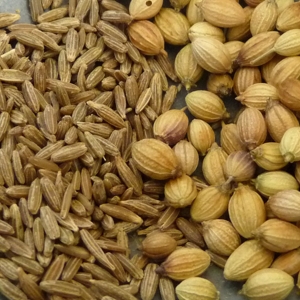 By now, if you follow this journal regularly, you’ll have read about a number of exotic cuisines from around the world which each has its own signature Spice Blend. In North Africa, they’re Ras al Hanouts. In India, they’re Masalas. But they all have two Spices in common… 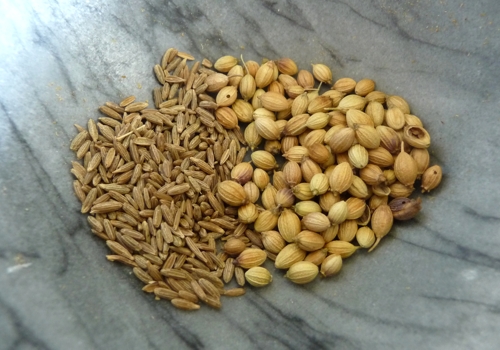 This is what a university might classify as post-grad work. You’ve already done the undergrad survey of the world’s main cooking styles and taken note of what sets each apart from the others. One thing that unites all these widely-ranging flavour traditions, though, is their reliance on signature Spice and Herb Blends.

Well… It goes further than that. I’ve noticed, in my culinary musings, that several components are common to most – if not all – of the major cuisines.

Starting to see a pattern, here?

Like Onions, Garlic, Potatoes, Tomatoes and other ingredients that keep popping up in the word’s cornerstone cuisines, Cumin and Coriander (along with Hot Peppers) seem to be everywhere. Setting the Peppers aside for a moment, let’s see if we can figure out that makes Cumin and Coriander so universal. They’re so commonly used in combination that they’re often sold as a blend, pre-ground and bagged like any other supermarket Spice.

Before we get started on our analysis, do me – and yourself – a favour: Grind up some whole Cumin and Coriander seeds in a Spice grinder or Mortar and Pestle. Take a good whiff… You should be getting a light, earthy undertone; a ‘spicy’ (but not hot) base flavour and a nice, Lemony high note. Taken all together, you’ve got a great complementary blend that can – and does – stand on its own with everything from Fish and Chicken to Pork and Veggies. For heavier fare, like Red Meats, Game and hearty Stews and Sauces, you can add those Hot Peppers along with other stuff, like Balsamic Vinegar and Red Wine if you’re Italian. Or Cinnamon, Cardamon and Cloves if you’re North African. Add lots of Hot Peppers, Lime Juice and Cloves if you’re Mexican.

But I really like to use the basic Cumin-Coriander mix with a little Cardamon as a quick flavour ‘refresher’ for Chicken, Fish and Seafood. A little Salt and White Pepper is all you need on top of that. Try it. I’ll bet you’ll like it, too!

Then, go on experimenting with other additions and formulations based on your new go-to Spice Blend. you’ll develop signature flavours that your family and guests will rave about – and never quite be able to figure out…