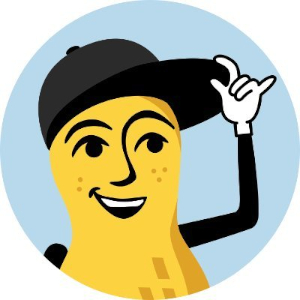 Remember how Mr. Peanut gave his animated life to save buds, actors Wesley Snipes and Matt Walsh following the mountainside crash of the Planters NUTmobile? And it’s turned out the Death of Mr. Peanut hasn’t been the only unusual thing to come down the pike (so far) this year… 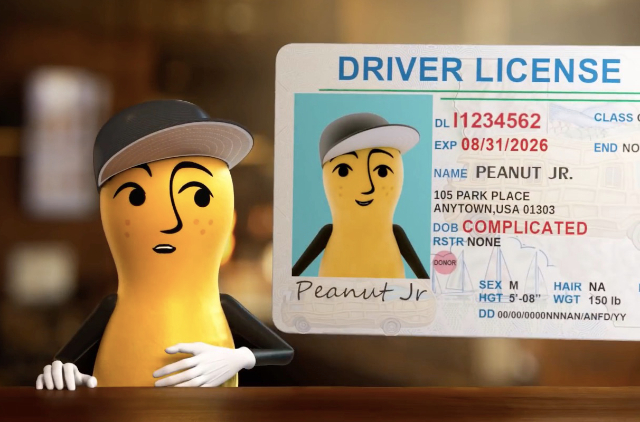 Many questions remain unanswered by the sudden appearance of ‘all grown up’
Peanut Jr. For instance: is this ID real or a fake, so he can buy booze?

No, you’re not seeing things. It appears that Baby Nut, who sprang from the tearfully interred remains of 104-year-old Mr. Peanut during the second half of the Super Bowl Game. No sooner had he been reincarnated as Baby Nut than his @MrPeanut Twitter account went mysteriously dark. Then the COVID-19 pandemic officially arrived, and he’s remained incommunicado – until now.

Imagine the surprise (or is it consternation?) of millions of Baby Nut Fans to discover that the resurrected legume has aged 21 years in the past 6 months!

“Before you ask, yes, I was just a baby. What can I say? It’s been a nutty year,” the character, who now goes by ‘Peanut Jr.’, replies to astounded inquiries. “Now someone get this peanut a beer!” Yah. Okay. I guess. Umm…

Well, it has been a pretty nutty year (just one relatively mild way to describe it) and many of us have been feeling that the time has been crawling by at a rate that’s made it seem like more than 2 decades have passed since last March.

Food blogger Adrienne Westenfeld jumped right on the Tweet that sparked the current controversy demanding explanations for the many questions the new ad campaign has raised:

“If Mr. Peanut was 104 at the time of his death, which occurred 104 years after his birth, how is Baby Nut now 21 after less than one year? When Peanut Jr. claims that he’s now ‘officially’, 21? By whose standards is his age ‘official’? Does the twisted aging process have anything to do with how legumes actually grow? Where is Peanut Jr.’s mask? Why is he flagrantly spreading the coronavirus at his local bar? Is Peanut Jr. an anti-masker? Is that a fake ID? How can a peanut weigh 150 pounds and stand 5’8, as the ID claims? And most importantly: how did Baby Nut age two decades in just seven months?”

Planter’s marketing department has not, as of this writing, replied…

But we do know this much…

The breaking of Twitter silence was officially meant to ‘shellabrate’ Peanut Jr.’s 21st birthday, which he’s marking by offering anybody who has had a birthday during the COVID-10 lock down by giving them a gift!

“To celebrate my 21st, I’m giving you the best birthday gift ever!” Peanut  Tweeted. “In 10 words or less, tell me your dream birthday gift with #MakeMyBirthdayNuts and #Sweepstakes to be entered to win $2,100 or a Planters Prize Pack! Rules: https://bit.ly/32IOhhj.”

In spite of the give-away promo, fans are pushing back against the unexplained reemergence of Mr. Peanut. Hashtag #BlockMrPeanut was trending big time on Twitter just yesterday. It’s all just good-natured fun, of course… But marketing and promo people should take note that, when they go too far, things can potentially get out of their control.