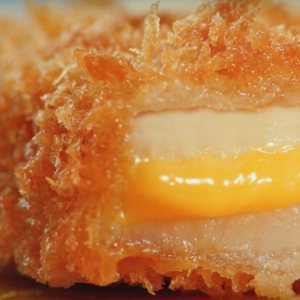 It’s still Menu Madness Season. And the Madness is not confined to the Western World, where fast food joints are elbow-to-elbow in their severely overcrowded niche. Japan has given us crazy dishes before, but now they’re offering a treat that could have come from anywhere… 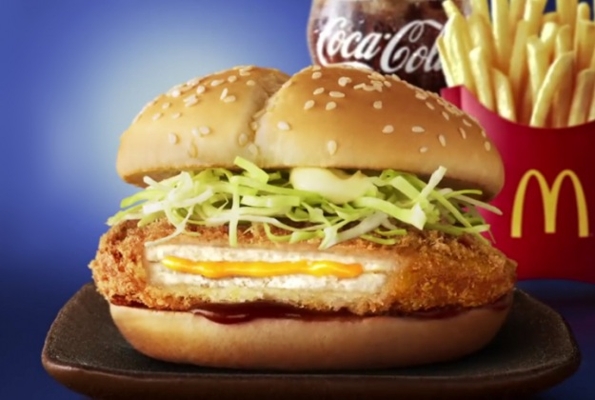 The McDonald’s Katsu Burger. Only in Japan and only for a limited time. But why in Japan?

McDonald’s has already brought the world, via Japan, Chocolate Fries and a number of far-out Burger and Nugget creations geared to the Japanese taste.

Now, there’s the Katsu Burger and it’s a Burger in overall appearance only. What it really is, is a deep-fried Pork Patty breaded and stuffed with Cheese, which looks like regular old Process (American) Cheese. That would be because they have a lot of Tofu in the Japanese diet, but not much Cheese. The ‘Burger’ is topped with shredded Cabbage and Mayo and served on a familiar-looking Sesame Seed Bun. Once fried, the thing oozes Cheese with every bite.

My take: I like the idea, but I’d have appreciated a nice flavour contrast of some kin. It’s pretty much one-note ‘fried’.

My observation is, they could have rolled out this menu item anywhere in the world McDonald’s operates where Pork is dietarily okay.Only, I think that they’d substitute Lettuce for the Cabbage in most other markets.

Why roll it out in Japan?

The Katsu is truly a World-Burger, in as much as its ingredients are international (except, maybe, that Cabbage). It would have been easy to make it more Japanese, just by using Teryaki Sauce instead of Mayo. I’m sure you can think of other ways to add Asian character. But McDonald’s Japan came up with it, for the Japanese Market. This tells me that Japanese fast food tastes are becoming Americanized, in the same way that American fast food concepts are smothering many of the world’s regional fast/street food traditions. Which is really a sad thing.

It’s just that I though Japan, with it’s history of isolationism, individualism and fierce nationalism, would be the last culture to succumb to the pressure of American globalism. Wait! Let me check… It may, indeed, be the last…