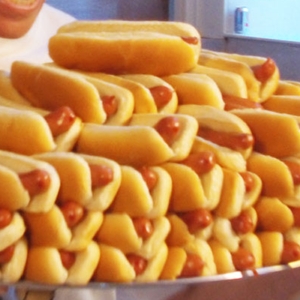 We covered the annual July 4 Nathan’s Famous Hot Dog Eating Contest a couple of weeks back, as we usually do, and duly reported that winner Joey Chestnut had rammed in a new record of 75 Dogs and Buns. But now science suggests there is a theoretical limit to how much food a human being can choke down… 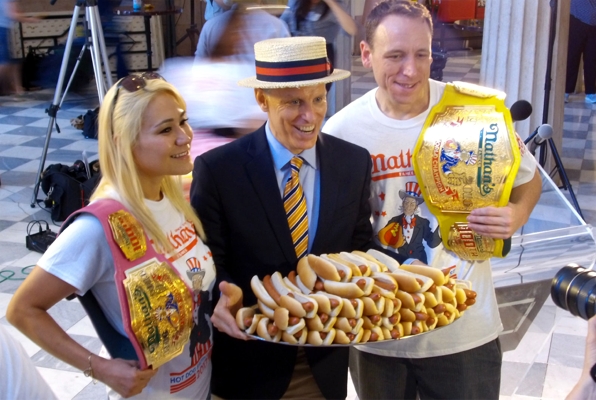 A researchers wanted to know…

… If there was a hard upper limit to how much food a human being can consume in a single sitting. And he set out to determine what that limit might be by designing a data-mining experiment analyzing 39 years worth of recent historical data from the Nathan’s Famous contest, held every year for the past 104.

Smoliga compared the data from the Nathan’s contest with known growth curves from other elite sports to determine where Hot Dog Eating fits in.

He was able to claim that his research would produce a valid outcome closely controlled for variances in most variables after confirming that the ‘standard’ Nathan’s Frankfurter and Bun has not changed in size or composition since the company started making them back in 1916.

Smoliga found that his analysis resulted in performance evolution curves that corresponded closely to those for other high-performance sports. That is, Hot Dog Eating followed a sigmoidal curve, showing an initial steady rise in the number of Dogs consumed each year by the winners, then breaking into a a period of rapid improvement (when serious competitive eaters started employing ‘scientific’ techniques and procedures to push their performance), and finally a flattening of the curve – as they presumably near the absolute limit of human performance.

Chestnut’s record currently stands at 75 Dogs in under 10 minutes. Smoliga calculates that the maximum limit is 84 Dogs – just 9 more.

If this is true, what does it mean for the whole international competitive eating ‘industry’? Professional Competitive Eaters like Chestnut train and compete full-time, year round, and many food and entertainment brands rely on a symbiotic relationship with the Eating community to survive and thrive.

I suspect Smoliga and his compatriots (if any other legitimate scientific researchers are actually looking at the phenomenon of Competitive Eating) have probably not taken into account some of the darker secrets of the ‘Eating Game’.

For one thing, competitive eaters aren’t doing what they do to satisfy any natural (or even unnatural) nutritional cravings or goals. The grim truth is, they ‘train’ hard to achieve and maintain the grotesquely stretched stomachs which make their spectacular performances possible, but they don’t actually retain the food they consume during competitions. Shortly after a contest ends, they retire to a private place and ‘vacate’ the stuff the hogged down. If you haven’t figured it out yet, ‘vacate’ is just a polite word for ‘regurgitate’.

Even though Smoliga insists there is a limit to how much food even pro eaters can bite, chew and swallow over a set period of time, I know from reading about their exploits that pro Eaters are constantly honing and perfecting their ‘input techniques’ and stomach-stretching methods to push their limits ever further. As I understand it, the ultimate limits on their performance – if there are any – may be defined by their own ingenuity and their motivation to push the envelope.

There was a time when the experts insisted that a sub-4-minute mile and a sub-2-hour marathon were beyond human limits. Well, somebody eventually found a way to achieve both. As long as competitive eating remains a lucrative ‘sport’ for both sponsors and participants, I predict that the ‘envelope’ will continue to expand and the curve will never completely flatten…