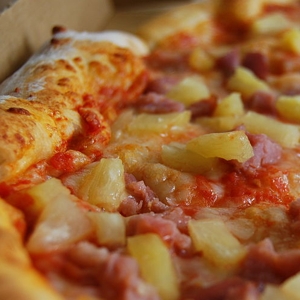 Yes, it’s true. The inventor of the sometimes beloved, oft berated Hawaiian Pizza has passed away in London, Ontario, Canada. ‘Canada’, you say? Yup. And that’s where he invented the iconic pioneering ‘fusion’ dish over fifty years ago. But, as fate would have it, he was neither Italian nor Hawaiian! 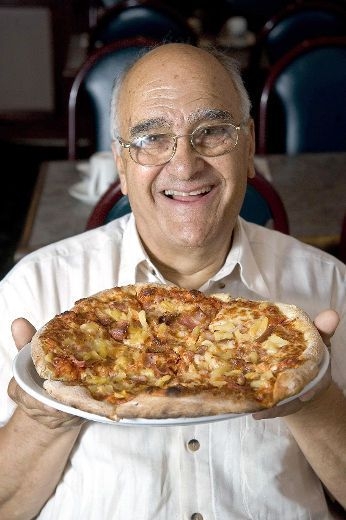 Sam Panopoulos came to Canada in 1954 at the age of 20. On the way, he stopped over at Naples, the birthplace of Pizza. He was not impressed, but saw potential.

When Panopoulos opened the Satellite Restaurant, in Chatham, Ontario, just west of London, he served a ‘standard’ North American menu. Soon, he expanded to include ‘standard’ Chinese dishes, at the urging of the substantial Chinese population in Chatham. No one else was serving Chinese Food there at the time!

In 1962, he came back to Pizza, as another vector for menu expansion. Not much was known about the Pie at that time. So he and his brothers drove 50 miles to Detroit to see what was happening there. At that time, he told one interviewer, the only toppings available were Bacon, Mushroom and Pepperoni. Thereupon began his lifelong quest for new and interesting Pizza toppings.

While Ham and Pineapple are traditional Hawaiian foods, nobody had thought of putting them together, much less on a Pizza. His invention was met with either praise and elation, or condemnation, depending on the taster. So it remains to this day.

In fact, earlier this year, The Prime Minister of Iceland said, publicly, that he hated Hawaiian Pizza so much he was considering outlawing Pineapple as a Pizza topping there. Canadian Prime Minister Justin Trudeau came back with praise for, “this delicious Southwestern Ontario creation,” at #TeamPineapple. Hawaiian Pizza has been hailed as a truly Canadian treat, on a level with Poutine and Maple Syrup.

Sam Panopoulos sold the Satellite in 1975 and opened a new restaurant called The Family Circle. The Original Hawaiian Pizza is still on the menu at The Satellite today, at (C)$21. for a Large.