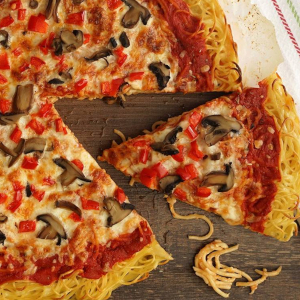 Guy Fieri has been chaffing himself to the bone under the limitations of COVID-19 Lock Down self-isolation regulations. But that doesn’t mean he hasn’t been busy creating crazy new dishes that will tickle even the most critical eater – as long as they have a funny bone…

Hold onto your Chef’s cap! We have a compendium, today, of loosely related ideas for a umber of COVID-19 Lock Down Cooking projects that you’ll still be making long after the current pandemic crisis is over.

Culinary madman Guy Fieri is working from home these days, making new episodes of ‘Triple D’ (Diners, Drive-Ins and Dives) in his own kitchen with the able assistance of his eldest son, Hunter. Hunter has long been a faithful sidekick to his Dad, one who started accompanying Guy on culinary voyages of exploration around the world when he was a teen, and has now evolved into an able kitchen wing man.

A recent ‘home-made’ episode of Triple D featured what Guy billed as a Chicken Parmesan Waffle. “Okay,” you say: “What’s so special about Chicken and Waffles with an Italian theme?” In this version, the ‘Waffle’ is actually a close relation to the Spaghetti Pie, (see photo, left) and the recipe includes some valuable tips for turning out perfect Pasta-based Faux Pastry products.

Spaghetti Pie recipes use a variety of additions to ensure that they hold together when baked. This usually involves a beaten Egg or two, or several hands-full of grated Cheese. The Egg is blissfully invisible and adds no significant flavour of its own to the overall dish, if that’s what you need n a given situation. However, Fieri reveals that he has moved to a slightly more sophisticated approach, adding a small amount of a lightweight Batter to the cold (can be leftover) Pasta before stuffing it in the Waffle Iron:

XXXX
Beyond this nifty wrinkle, the dish is mainly the Waffle topped with Breaded Chicken Cutlet(s) and Marinara Sauce and a generous garnish of grated Parmesan. But the Batter wrinkle is critical to the success of the Pasta Waffle. And, as we’ll see in a minute, it’s a great tip to enhance and ‘fail-proof’ some other recipes that will brighten up your pandemic lock down menus…

One of the first dishes that comes to mind is the Pasta Muffin, a variation on the aforementioned Pie, which is a great way to upgrade the dish to an elegant, saucy Brunch, Lunch or Supper presentation. I particularly like the idea of substituting a Pasta Cup (also formed in a Muffin tin cup) for the usual Puff Pastry cup in a dish like Chicken à la King.

Not too long ago – in the greater scheme of things – there was short-lived fad for Spaghetti Pizza (see photo, top of page). The Pasta-based Pizza Crust was, like Spaghetti Pie, a tweak to add interest to an iconic dish which somebody decided needed an ‘update’. But it was fun, and it generated lots of consumer interest for a few news cycles.

Not just Pasta, either…

While we’re on this subject, I would like to present an UPDATE on a previous recipe idea that I swiped from some other celebrity chef at one time or another: Leftover Turkey Dressing Waffles. My recipe calls for moist (not wet) leftover Turkey Dressing/Stuffing. You just spread about 1/2 in. / 1.5 cm of uncompressed Dressing over your pre-heated Waffle Iron, close the Iron and bake until the Crust of the Waffle is crunchy and the interior is still soft and chewy. Problem is, a lot of readers have tried to use Dressing/Stuffing that’s too moist, and all they get is a mess.

My recipe update is simply to spread the leftover Stuffing over a sheet pan or cookie sheet in an even layer no more than about 3/4 in. / 2 cm thick and toast in a low oven (around 180 F) until it’s fairly dry, but still moist enough to stick together if you try to roll it into a ball. Now, follow the original recipe as written. And to add a bit of an insurance policy, place the toasted Stuffing in a large steel mixing bowl and stir-in a little of Fieri’s binding Batter or the aforementioned Beaten Egg(s). Drizzle the Batter/Egg as evenly as possible over the Stuffing before starting to stir, to ensure that every morsel or clump of stuffing gets some of the binder on it.

And there you go…

Have fun with Pasta in roles it’s where not traditionally employed! And keep trying other Starchy concoctions as Crust, Waffle and even Pancake stand-ins!