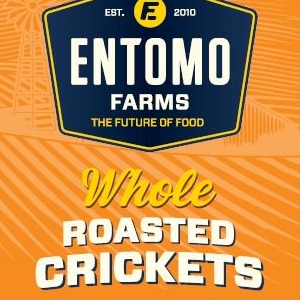 It had to happen, in the face of rising prices for conventional foods and the resultant need for the average consumer to source alternative food sources. But I still can’t get my head around eating insects. i know. they’re just tiny little animals, not unlike cows and pigs and sheep, in some respects… 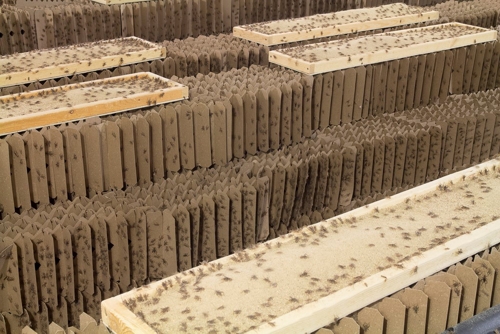 A Cricket breeding facility at Entomo Farms. People complain about the
treatment of battery Chickens… But will they speak up for the
Crickets and Mealworms and all their edible kin?

…But their perceived place in the Grand Order of Things is is not the Dinner Table. At least for me. I mean. most of the people alive today – at lest in the Western, developed world – think of insects negatively. More than that; I think of them as trouble. Trouble, with a capital ‘T’, and that rhymes wit ‘P’ and that stands for ‘Poop’! Sounds like something pour of an old-time show tune. Anyway…

Flies lay their eggs on Poop. We all know what it means when somebody says something ‘Bugs them’. We panic when the Exterminator says we’ve got Termites. We cringe every seven years when the Earwigs come out in armies and devour our gardens. We stare in amazement as plagues of Grasshoppers descend upon us and eat everything in sight. Insects are just Bad, bad, BAD! Right?

We’re now racing ahead with plan to ‘food-ize’ 0as in ‘weaponize’) insects. in the forefront of the alternative protein crusade are Crickets, Meal Worms and similar critters. Most of these have been test-driven in Asian and African markets where consumers are now sort of used to chowing down on Toasted Crickets and Roasted Meal Worms.

On the up side, Insects are relatively easy to farm. Like weeds (the insects of the vegetable world) they are resilient and prolific and spread like crazy. And you can get a lot of them in a small space. Sounds like a win-win. And that’s what a trip of brothers from Peterboro, northwest of Toronto, are counting on.

Darren, Ryan and Dr. Jarrod Goldin have started up Entomo Farms, and their business is the large-scale production of Crickets. Now, Crickets aren’t just for Candy-coated sweeties and Salty Toasted snacks. The big market, say the Goldin’s, is in Powdered Crickets and Cricket Flour, to be used in processed foods. Bonus! You don’t see bugs when they’re reduced to Flour and mixed with other stuff…

How successful has the business been? They’re in a 60,000 square ft. facility now and are planning an expansion. They send their products all around the world. If you doubt the popularity of Insects a Human food, just look at some retail websites, such as Entomarket. Hundreds of Insect-related products and many – well, you’d never know insects were involved if it didn’t say so on the package.

How close are we to mainstreaming ‘Food-sects’?

One of the all-star nutty Fair Foods at the Calgary Stampede this year is a plate of Mini Doughnuts topped with Caramel and Crickets.