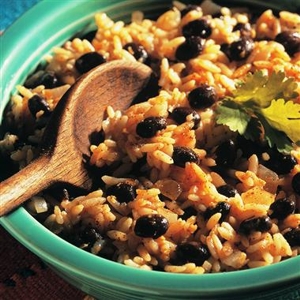 We wish. And, now, an overview of current conditions in the Food market (pun intended) seem to indicate that they will. Soon. However… I see things differently. I think, based on my own experience with life, that prices may just stay high but stabilize. And that will be bad in the long run… 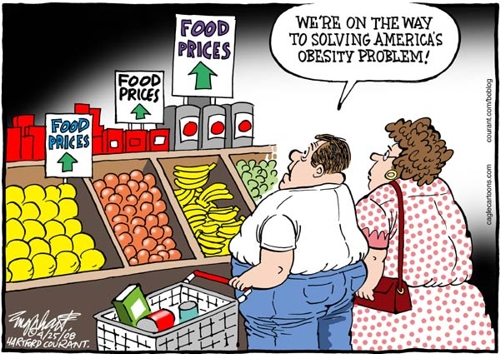 One very dark spin on the issue of soaring food prices. We want to stem the
obesity epidemic, but not by starvation!

A new report on Food Price Trends claims prices are due to start falling soon. Great! Bring it on!

The report, by Kevin Grier Market Analysis & Consulting, says “…there are two main factors that drive food inflation in Canada: commodity prices and grocer competition. Both factors are not pointing to robust price increases in Canada.”

Not only that, but supermarket competition is heating up, and that’s good for consumers, too: “There are strong reasons to say that the competitive rivalry is heating up after cooling off in 2015. More intense competition usually means lower prices.”

The way I see it…

Just last week, Loblaws underlined its demand for lower prices from suppliers with a second letter to them saying it’s time the wholesale sector shouldered their fair share of the burden of rising food costs. Loblaws’ sales have been more or less flat over the past year and Sobey’s recorded a (C)$2.3 billion (with a ‘b’) loss for the most recent fiscal year. We can assume that other supermarket chains are in similar binds.

Meanwhile, Canadians are buying less Meat and are choosing cheaper brands of the stuff they always buy anyway. That’s one reason supermarket revenues are down.

Clearly, the supermarket chains must lead a crusade for lower prices – to save themselves, if not to provide sorely-needed price relief to consumers. But I don’t think that’s going to happen.

While Loblaws CEO Galen Weston has promised publicly to drop his chain’s retain prices 1.45 per cent this September, I don;t think that’s much of a reduction. Not since produce and Meat prices have doubles, in some cases, in the past year or so. It’s a token commitment. If suppliers give Galen the reductions he wants, I predict he’ll hold onto every penny in excess of his 1.45 per cent retail reduction commitment to bolster his own profits… We’ll see. But I further predict that the other supermarket chains will follow along and do whatever Galen does.

I predicted the ‘less meat, cheaper brands’ trend months before it was confirmed in the news. Unless something gives in the supply chain, I believe the average consumer will continue to cut corners and save money on food wherever they can. Sales of Ground Beef and Hot Dogs will soar. Steaks and Roasts will eventually be available only in specialty shops. More and more of us will break down and veer away from meat and Potatoes toward Beans and Rice. And the home kitchen garden will enjoy a renaissance. All because we have to, not because we want to.

How the supermarket chains respond to these ongoing changes will, of course, be entirely up to them. Galen Weston’s demand for lower prices from his suppliers seems a desperation move, devoid of vision and creativity. And it’s no long-term solution.