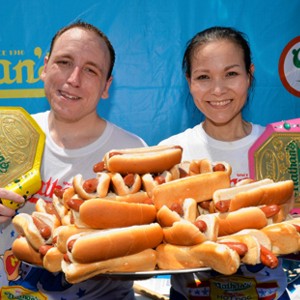 The results are in! And few are surprised to learn that a long-time competitor at the Nathan’s Original 4th of July Hot Dog Eating Contest took home the Men’s trophy in yesterday’s annual event. But he failed to beat his own personal best of 69 Dogs with Buns, set a few years back… 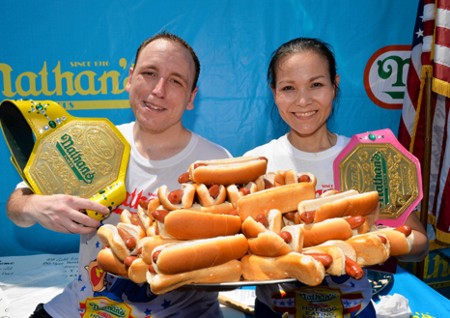 Winners Joey “Jaws” Chestnut and Miki Sudo pose in triumph with a great big
platter of Dogs, representing the 61 and 34 dog each ate, respectively,
to take home their 2014 championship belts.

Eight-time winner Joey “Jaws” Chestnut of San José, CA, took home the winner’s Mustard-yellow trophy belt again Friday at the annual Nathan’s Original 4th of July Hot Dog Eating Contest. He managed to down 61 Dogs with Buns, falling short of his all-time record of 69 but exceeding the capacity of his nearest challenger by a solid five Dogs.

In the women’s division, defending champ Sonya “Black Widow” Thomas of Arlington, VA, came in second, consuming only 27.75 Dogs with Buns against challenger Miki Sudo, of Las Vegas, NV, who made 34 disappear.

And there was a special feature for early-arriving spectators at this year’s NO4JHDEC – Joey Chestnut took a moment out from his pre-gorge ritual to propose, on bended knee, to his longtime girlfriend, who came all the way from San Jose to cheer him on.