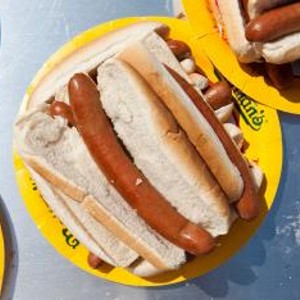 Happy 4th of July! Have another Hot Dog…

It’s the traditional thing to eat on the U.S. Independence Day holiday: The all-American Hot Dog. I’ve got a few DOs and DON’Ts for you that will make your holiday Frankfurters even better than before and celebrate the wondrous spectrum of cultures that have melded into the North American Mosaic. 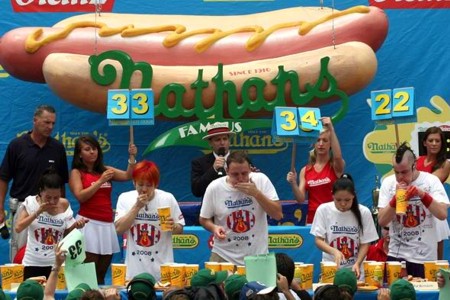 The leaders, in the thick of the competition – and the mustard shower – at the
2013 Nathan’s Original Fouth of July Hot Dog Eating Contest at Coney Island.
The contest – the first real competitive eating event outside of pie and
watermelon games at county fairs – is as much a holiday tradition
as the Hot Dog, itself!

The basic All American Hot Dog, as we know it, was, indeed, invented in New York City in 1916 by Polish immigrant Nathan Handwerker. He and his wife started selling Dogs on buns from a stand at Coney Island in 1916 and never looked back. You can still get Nathan’s Famous Dogs at any of several hundred vendor carts all over NYC, as well as at the original location, on the beach at Coney Island – not to mention in selected delis and grocery stores across North America.

Dogs by the numbers…

Here’s a great quote for you, from a recent post about the state of the Dog in America:

“…no day is better for hot dog consumption than the Fourth of July, when Americans [are] expected to eat about 150 million of them — enough to stretch from Washington, D.C., to Los Angeles more than five times.”

Nevertheless, the popularity of classic Frankfurter, which will be paired forever in our psyches with good old yellow mustard, is on the decline. Why? One theory postulates that the slowing birth rate in North America is causing a shortage of children – traditionally the biggest consumers of Hot Dogs. Another theory says most immigrants to North America these days are from Asia, not Europe as in the last century, and the Asians just don’t have the same ‘Sausage’ traditions in their culinary cultures as Europeans do.

But that doesn’t man the Dog is dieing, by any means…

I”ve gathered a few tips for you, designed to make your 2014 holiday Hot Dogs the best ever…

And while you’re at it…

Have a great holiday!