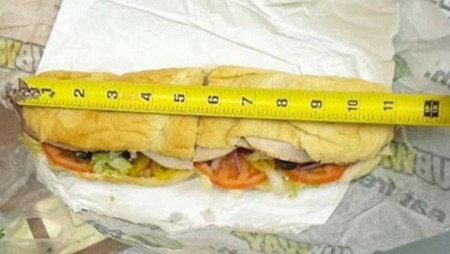 Subway and The Angry Inch…

Remember that silly lawsuit brought by two New Jersey men against Subway sandwich shops? The one claiming that the mega-fast-food chain was cheating its customers by selling ‘Footlong’ subs that didn’t measure a full 12 inches? Well, it’s finally been settled two years later…

The original 11 in. ‘Footlong’ photo posted to the Net over two years ago.

Okay. I’ll admit it. I thought this silly suit would just go away, like most frivolous lawsuits, after Subway declared that ‘Footlong’ was merely a product name, not a marketing claim. I never expected it to balloon into a class action with an outcome that would affect all Subway customers.

Subway was accused of short changing customers – literally – by selling sandwiches what measured less than their described length of ‘a foot long’. One guy posted a photo of an 11.5 in. Subway sub to the Internet and cried foul. Hundreds – maybe thousands – of other Subway patrons applied the ruler test to their recent Footlong purchases and found that their buns also fell short.

Now, I’m not one to get on bandwagons like this and I said so in a post back in 2013. I thought then, and still believe, that you’re getting full measure for your sub, provided you still get the same number of slices of meat and cheese on the bun. Even if it is as much as an inch shorter. I called it ‘A Tempest in a Sub bun’.

Subway initially countered with the argument that the term ‘Footlong’ was merely a part of the sandwich’s name and not a guarantee of the size of the sandwich. It was registered as a Trademark and, therefore, not subject to statistical scrutiny.

But those behind the lawsuit insisted that Subway considered the ‘Footlong’ name a claim that the sandwich was, indeed, a foot long. In support of their claim, they showed a series of Subway TV commercials showing people from all walks of life holding their hands up in the eternal ‘one that got away’ gesture indicating the size of Subway’s Footlong sandwiches, as if confirming that ‘Footlong’ means ‘a foot long’.

Yesterday, The Associated Press reported that Subway and nine class action complainants had come to a settlement in which the company will pay each plaintiff a token (US)$1,000 and equip all its stores with ‘measuring equipment ‘ to ensure that customers get a fill 12 in. of bread in their ‘Footlong’ subs and six full inches in their ‘6 in.’ subs.

The settlement has still to be approved in federal court. That hearing is scheduled for Jan. 15, next year, almost a year to the day after the whole thing first went to court.

But I have another, more serious issue with Subway…

Are you a Subway customer? Have you noticed that the chain is slicing its Meat, Cheese and other ingredients much thinner than the used to? That’s Subway’s way of activating the supposedly invisible ‘less product for the same price’ scam that many other food retailers have been running on the public for a couple of years, now.

I’ve stopped going to Subway in protest of their egregious downsizing.. And I’ve started going (once every couple of weeks, when time is tight or I’m too tired to cook) to the competition, which still serves a fully-stuffed sub for pretty much the same price. I do hope that joints like Quizno’s and Mr. Sub continue to offer exceptional value for my money. I think they’ll see a rise in sales as other disappointed Subway fans change allegiances.