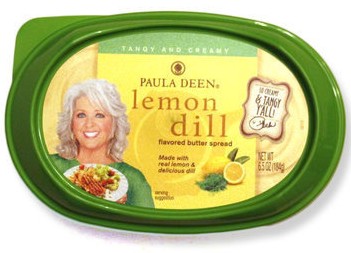 Yup, y’all! Paula Deen, the self-proclaimed Queen of Southern Cuisine – and butter – is in the news again. Now, she’s launching a new line of ‘finishing’ butters. Does that send mixed messages after her recent diabetes diagnosis and dietary disclaimers? 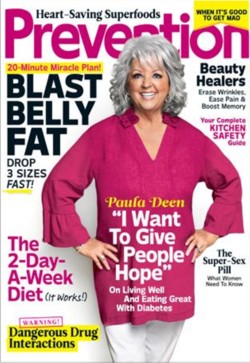 Okay… She’s lost 40 pounds on a new diet she started following the hubbub over her diabetes disclosure. And she’s been making an effort to rebrand herself as ‘healthy’. Some critics say it’s a ‘weak attempt’.

Nevertheless… She’s launched a line of tub-packaged soft ‘finishing butters’. She says it helps you to cut down on butter, ’cause you simply put some in at the end for flavour. And flavour is the operative word. Debut ‘flavours’ include:
• Southern Grilling Butter
• The Lemon Dill Butter
• The European Style Butter
• Sweet Citrus Zest Butter
• Garden Herb Butter – and –
• (Plain old?) Sea Salt

I guess that could be said to carry over to her new line of ‘all natural’ tortilla chips and sugar-free chocolates, coming soon to… A Wallmart in the U.S. Southeast.