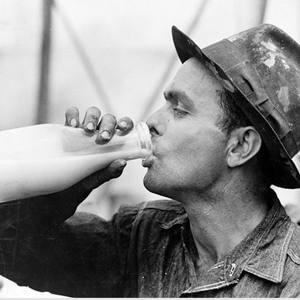 I thought I’d just about heard it all, with crazy food conspiracy theories. Then, I read the recent article by Anne Kingston in Maclean’s about a book that alleges Milk is bad for you and that the Dairy Industry has colluded and conspired for decades to make us think its products are essential to our diets… 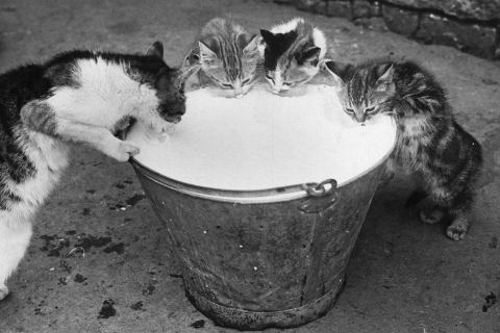 Many other species, from cats to snakes, like Cow’s Milk.
It’s just a matter of availability…

The lengthy feature article looks at a recent overview by Yale University professor Alissa Hamilton that surveys a wide array of studies and research papers which claim Milk and Milk products can cause cancer, increase chance of bone fractures and damage the environment.

You can order Hamilton’s book here, if you want to. Then decide for yourself.

But my purpose in posting this issue is to give exposure to some contrasting opinions on Milk.

I think it’s Great. You can cook with it and rehydrate with it – it’s loaded with vitamins and minerals! – and it’s just about the best thing ever with cookies!

While Hamilton contends that humans are the only animal known to drink the milk of others, I hasten to point out that cats love cow’s milk. Move the cows out of a barn and the cats soon move on. Ask any farmer. lots of other animals will drink it, including some reptiles. It’s just that, without human intervention, other animals must find it really, really had to get. So, it’s a matter of availability not preference. And it is clearly not aberrant for humans to drink milk.

I also hasten to point out that some of the healthiest, longest-lived people on the planet – herders from the Ural Mountains – thrive on a diet that is primarily made up of Milk and Yoghurt.

Is, as Hamilton contends, Dairy farming even more damaging than Beef farming? a 2014 documentary film, Cowspiracy: The Sustainability Secret, claims it takes more than 1,000 gallons / 4,000 L of water to produce 1 Qt. / L of fluid milk. Water goes round and round in the environment. Some comes out of the cow as urine to be soaked up by straw bedding; more comes out in feces. Most of that goes into the manure crib for spreading on the fields next spring – fields where the farmers grow feed for the cows. What about process water used in the Dairy Processing industry? Most of what is not from the milk itself is used for cleaning and sanitizing machinery and containers. That’s all recyclable.

By the way… www.dairygoodness.ca says that the average cow produces up to 18 gallons of Milk per day, over two milkings. That translates to 18,000 gallons of water per day, per cow. Clearly, Hamilton’s estimate contains a lot of ‘hidden’ water. Or is off by some factor of 10…

Anyway. One of Hamilton’s major arguments against Milk is that you can get Calcium, Magnesium and other ‘essential vitamins and minerals’ in greater concentrations from Green, Leafy Vegetables and Nuts.

So… Why doesn’t mother’s breast offer up Spinach Juice to her newborn babe?

I know. That’s pretty silly. But Hamilton’s arguments are all about what’s natural and healthy!

Let me leave you with a nugget of common sense…

Milk and Milk products were probably the first animal products aside from meat itself to be ‘domesticated’ by humanity hundreds of generations ago. It’s believed that Cheese and Yoghurt came about when some traveler took a goatskin full of milk across a burning desert and found it had curdled when he bedded down for the night. If Milk was as bad for us, in so many ways, as Hamilton claims, would we not have found out about it a long time ago?