Is Ice Cream an Edangered Species?

I’ve just read a Daily Brew online article lamenting the fact that Ice Cream sales in Canada have dropped by almost half since 2004. There are apparently lots of reasons for that, but the post misses the one I think is most responsible for diners – particularly young ones – turning away from Ice Cream… 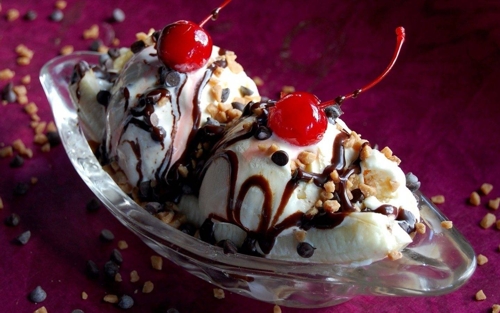 This classic Banana Split Sundae may be a thing of the past – or, at least, a luxury
unaffordable to the masses, if current trends in the Ice Cream industry continue…

The in-depth Daily Brew Ice Cream exposé contends that a whole mess of trends and economic conditions are combining to drive folks away from Ice Cream towards other summer treats.

There’s been an upsurge in the popularity of low-sugar and unsweetened desserts and beverages since the turn of the Millennium. That’s had a significant effect on Ice Cream sales, says the article. Then, there’s the related development that many commercial ‘Ice Cream’ products – especially individual serving treats on sticks or in waffle cones – now have little or no actual dairy ingredients in them. The ‘cream’ is actually texturized, processed vegetable oil. (The process is similar to that used to make non-dairy milk-like beverages, cheeses and other products.) A lot of people these days are steering clear of heavily-processed foods.

Then consider that, in this health-conscious age, fatty, sugary calorie-laden Ice Cream is a prime target for criticism and disdain – just because it is what it is.

Changing social patterns and customs are also contributing to the decline of Ice Cream sales. Whereas, back in the day, teens used to congregate at the Soda/Malt Shoppe or Ice Cream Parlour, they now tend to haunt Coffee Shops and Fast Food emporiums.

But I have another theory…

Have the industry leaders’ brain trusts and the so-called market analysts not noticed that Ice Cream, which used to be a nickel or dime treat at the corner store, has become tortuously expensive over the past 15 years? Like Chocolate products, which have skyrocketed in price due to rising prices paid to growers, ever-increasing transportation costs and recent crop failures – real, dairy Ice Cream has fallen prey to ‘prevailing economic conditions’.

At the same time. the rich have gotten richer and the poor steadily poorer. There really is no middle class anymore. Just a sort of upper working class whose members are having to work harder and harder to maintain their accustomed standard of living. Even so, they are facing hard choices about all aspects of their lives – choices that involve balancing lowered expectations with rising costs.

There’s an Official Tooth Fairy Index – an economic indicator based on what  kids get for baby teeth from the Tooth Fairy in countries around the world – which closely follows the S&P 500 stock index. I wonder that kind of correlation we would find between an Ice Cream Price Index and leading economic indicators?