Kids Who Only Eat Sausages: What’s Up With That?

This morning, I came across a current story about a kid in the UK who would only eat Sausages. Sausages and plain Water. He was 15 years old and  had eaten nothing but Sausages since being weaned off milk as an infant. Okay, he would occasionally eat Fries and a couple of other foods, too, but only if they were accompanied by Sausages… 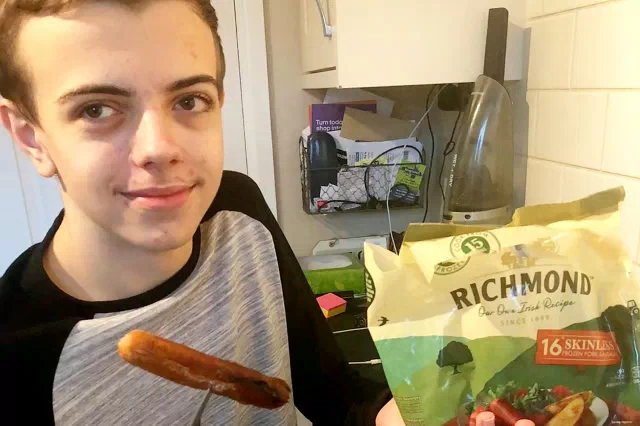 My first question, of course, was, “Why had his parents not done nothing about this quirk earlier in his life?” His mom, Wendy Simpson, an Amazon warehouse worker, avoided saying anything about that when she told her story to reporters. But she was surprisingly forthcoming about the details of her son, Ben’s affliction.

“When he was a baby, I weaned him off […] of milk and I started to feed him on solid food. I noticed that he wasn’t eating what other children would eat. He would only eat finger food like chips and stuff like that. As he got older, he would stick to sausages.”

His pickiness became legendary among extended family and friends.

“When he went to parties in school, the children’s parents […] would go out for food. All the other children would happily tuck into the food, except Ben. He would just sit there crying or he would refuse to go in where the food was. “If we went to a friend’s house he just wouldn’t eat anything. He’d say he wasn’t hungry and it was just a nightmare.”

Not only was Ben ‘addicted’ to a specific kind of sausages, but a specific brand.

“It was sausages all the time. Specifically, Richmond Sausages and they have to be skinless. He sometimes has chips or waffles but there always has to be Sausages.”

“For each meal, I give him about four or five Sausages. They come in packs of 16 and we go through a few of those a week. I get fed up with buying them.”

The answer was hypnosis

Wendy hooked up with behavioural psychologist David Kilmurry, a specialist in childhood eating disorders, via the internet and arranged a face time session for Ben. After a very short period of time, the 15-year-old came around and now, apparently, he’ll try any food at least once. His affliction was diagnosed by Kilmurry as ARFID – fear of all but Brand Specific Foods – and even he was getting fed up (my pun) with dealing with it.

“Ben was sad that he couldn’t keep up socially and lacked concentration and stamina as opposed to his peers at school,” Kilmurry explained. “It’s a full recovery, as Ben now consumes anything put in front of him with minimal reluctance.”

But it’s not a unique case

When I googled ‘kid eats only sausages’ and related search strings, I got back pages and pages of hits involving other kids with the same story. “What is this thing with kids eating only hot dogs”?” I wondered.

According to Wikipedia: “Avoidant/restrictive food intake disorder (ARFID), previously known as selective eating disorder (SED), is a type of eating disorder in which people eat only within an extremely narrow repertoire of foods. This avoidance may be based on appearance, smell, taste, texture, brand, presentation, or a past negative experience with the food, to a point that may lead to nutritional deficiencies or other negative health outcomes.”

It’s an officially-recognised psychological disorder, and folks of any age can suffer from it. It’s got its own section in the Diagnostic and Statistical Manual of Mental Disorders (DSM–5), which pretty much all psychologists ad psychiatrists use to help them pinpoint patient diagnoses. But even the DSM-5 doesn’t venture a guess as to why it’s so often Hot Dogs that kids get hooked on. And how does a kid who only eats Hot Dogs even live to be 15 without suffering extreme physical and mental disorders?

If anybody out there knows, please e-mail me. It’s driving me bananas…