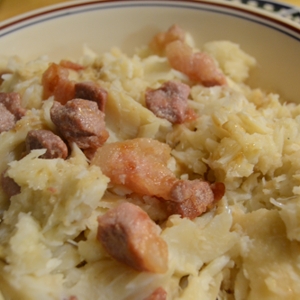 Have You Tried Scrunchions or Brewis?

When you look at lists of trademark dishes from different countries around the world, you’ll find many entries for the ancient cultures and respectable lists for the European cultures, the New World indigenous cuisines and even the U.S. But when you look up Canada… 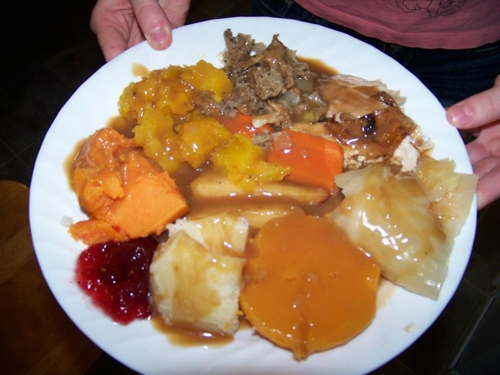 The real deal… Jiggs Dinner, with Cranberries and Gravy, for Christmas!

…Here’s what you typically find:

So, in my own humble attempt to right this egregious wrong, I offer the following compendium of traditional – and unique – dishes from Newfoundland…

Bakeapples – A berry peculiar to Newfoundland which has all the scrumptious charm that the Saskatoon Berry gives the Prairies. They actually look like big orange Raspberries and smell like apples. Also known as Cloudberries elsewhere. Have ’em in a pie!

Cod and Brewis – That’s Salt Cod, soaked for 24 hours in cold Water and fried, smothered in or mixed with Brewis – crispy Fried Pork Bits (not unlike Mexican Chicharróns}.

Cod Tongues – Actually strips of flesh from the sides of the throat. The tenderest, most desirable part of the fish, according to many Maritimers. Fry e’m and cover with Scrunchions (see below).

Flipper Pie – Seal Flipper Meat served in a Pie. This one has echoes in Scandinavia, where the Catholic Church pronounced Seal Flippers a seafood, and therefore Lent-friejndly, several centuries ago.

Scrunchions – Irregular-shaped bits of Cured Salt Pork fried until deep golden brown and all the fat is rendered.

Touton – Upper Canada has Beaver Tails. Newfoundland has Touton – a fried flat, Sweet Dough usually served with a pat of butter and a drizzle of Maple Syrup, Corn Syrup, or Molasses, or a smear of Jam.