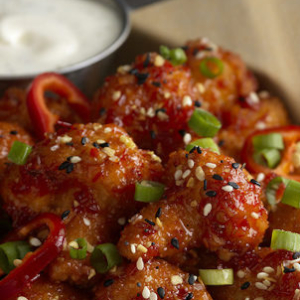 A nice array of basketed, bowled and hand-held mains, substantial entrée Salads and, and treats for Fall. The Cauliflower Wings from Buffalo Wild Wings (above) look and sound amazing! But it’s Chipotle’s Carne Asada that really turns my crank. If you’ve had it, you’ll know what I mean. Make mine a double… 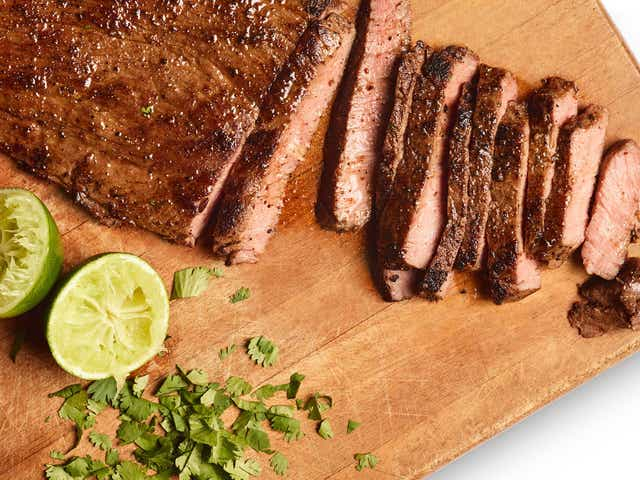 Chipotle’s Carne Asada is back: Who could resist anybody’s Carne Asada?
– If it’s cooked right, spiced right and cut right (across the grain)…

BWW débuts quirky Cauliflower Wings (see photo, top of page) which can be tossed in any of its Sauces, then topped with your choice of Pretzel Spice, Sesame, Garlic, Salt, Pepper, Fresno Peppers, and Green Onions.

BWW is also updating it Salad menu with the addition of a new Buffalo Wedge featuring a mini wedged Head of Romaine with Bleu Cheese Dressing and topped with Bacon, Tomato, Bleu Cheese Crumbles, Green Onions, and a Breaded Chicken Tender drizzled with medium Buffalo Sauce. (I want to know how they manage to cut a ‘head’ of Romaine into ‘wedges’!) There’s also a Chicken Caesar and a ‘Chopped’ Cobb Salad.

One of Chipotle’s most popular limited-time menu additions – its Carne Asada – is coming back, again for a limited time starting tomorrow, September 27. It’s rubbed with a blend of signature spices and grilled in small batches, then sliced and topped with a squeeze of Lime and Chopped Cilantro.

The Bell is showcasing its new Grand Stacker for a limited time. The Breakfasty-looking multi-layered creation starts with a warmed Flour Tortilla, then builds out with: a double portion of Seasoned Beef, a melted blend of Mozzarella, Cheddar, and Pepper Jack Cheeses, and warm Nacho Cheese Sauce. For the grand finale, the Quesadilla-reminiscent treat gets a tri-fold and a finishing kiss of the grill. Get it by itself or in a $5 Box with 2 Crunchy Tacos and a medium Fountain Drink.

Progresso has released a new Soup cup line that looks like it was designed with eat-at-your-desk home workers in mind. Progresso Toppers are described as single-serve Soups with Crunchy Toppings, each shipped in its own microwavable container. They’re available now at select retailers in 5 different flavours: Chicken Noodle with Oyster Crackers; Tomato Basil with Cheddar Crackers; Broccoli Cheese with Oyster Crackers; Loaded Potato with Fried Onion Strings’ and Chicken Tortilla with Tortilla Strips.

The Pumpkin Spice Latté is back at McDonald’s for fall, starting with a nice shot of McD’s Espresso dressed up with a choice of whole or nonfat Milk and Pumpkin Spice Syrup. It’s available at selected McD’s locations until U.S. Thanksgiving.

Sonic is stirring up Chocolate and Vanilla Trick or Tat Blasts for the spooky season. The ‘plain’ Vanilla Blast takes regular Soft Serve and blends it with M&M’s Minis, Snickers Candy Bar pieces, and Oreo Cookie pieces. If that’s not rich enough for you, add Chocolate Syrup and make it a Chocolate Blast. Available at participating Sonic locations through November 1.

Reese’s, whop have been experimenting with new flavours, combos and collabs over the past couple of years, have now introduced something right out of the low-profile but pervasive ‘Salted Sweets’ playbook that many vendors have been using over the past few months. Their newest brainchild is a regular-looking PB Cup stuffed with Peanut Butter Cream blended with Pretzel chunks. This innovation, available in regular and king size, will be a permanent addition to the family starting in November. Look for similar Potato Chip-stuffed Reese’s Cups coming early next year.

We previously reported that Kit Kat has trumpeted a series of impending new flavour roll-outs… Now, the Candy Bar maker has launched a Flavour Club subscription that will allow members to try new flavours before they are released to the general public. The catch is, you have to sign up at the website before September 29, and membership will be limited to 200 lucky fans. Apparently, the first Flavour Club pre-release will be samples of the new Mocha + Chocolate Duo due out at all the regular Kit Kat sources in November.

… On what’s guaranteed to make some of us a little fatter over the coming days and weeks, in spite of the continuing COVID-19 disruption to the restaurant sector. See you back here in 7 for the next edition of Fast Food Week!