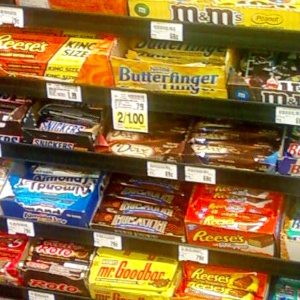 Once again, the City of Berkeley, California, has taken what seems like an obvious step to try to combat obesity across its health-conscious population. It’s given provisional go-ahead for a new municipal regulation prohibiting sales of junk food at checkout line locations in ‘large’ supermarkets and similar stores… 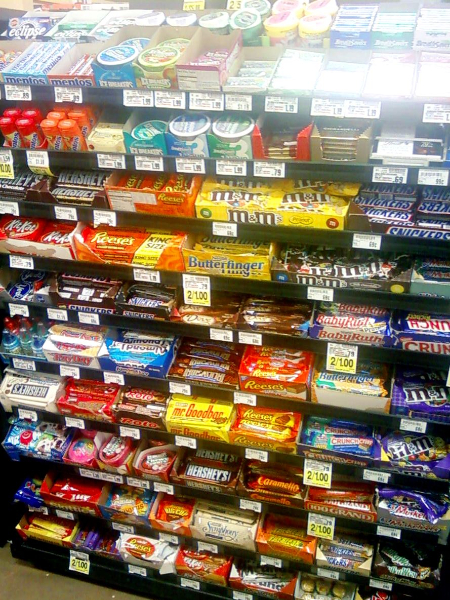 Dr. Obvious called last night all excited that after mere decades of ‘waiting for the other Candy Bar to drop’, an American city has become the first in North America to vote to prohibit Point of Sale (POS), or checkout line sales of junk food in an effort to help curb the rampaging obesity crisis.

Berkeley, California, City Council members last week gave unanimous first-phase approval to a new regulation that would ban sales of Candy Bars, Chips and other high-Salt, high-Fat, high-Calorie foods at Point of Sale in larger supermarkets, ‘Drug’ stores and similar outlets. Berkeley previously became the first American city to apply a Sugar Tax to Sugar-sweetened beverages and other fattening treats in an effort to encourage healthier eating habits and stem the obesity explosion that is costing health care systems across the developed world hundreds of billions of dollars a year to treat.

In the final analysis, after several other cities around the world had already followed suit, the Sugar Tax program proved at least partially successful in addressing the so-called obesity epidemic, but it remained to be seen whether it had permanently changed the eating habits of a large portion of the population; had effected real change.

In a move that Dr. Obvious describes as ‘reverse-engineering the obvious’, Berkeley’s City Fathers (and Mothers) hope to reduce the ‘impulse buying’ of unhealthy snacks and treats.

“Well, banning the placement of crap foods along the checkout lines at big, multi-checkout stores should discourage impulse buying,” the good Dr. observes. “After all, marketing types have known, almost since the supermarket was invented, that placing such products there will increase the likelihood that customers will grab something on the way past. And, with the price of Candy Bars (for example) having exploded from under a buck to several dollars apiece in recent years, that has meant a real windfall to the stores.”

First, Obvious wonders, will Berkeley stores go gently into the red ink of lost sales implied by the new regulations? Under the new rules, retailers will be allowed to keep selling large, multi-serving packs of the same products in their well-established Snacks aisles where they stock hundreds of styles, brands and flavours of high-Sugar, high-Fat, high-Salt, high-Calorie, highly-processed foods. What if the Point of Sale display ban just drives customers to buy larger packages of the same treats in the Junk aisle, increasing their intake of unhealthy, empty Calories?

Second, the Dr. reminds us, Sugar, Salt and Fat have proven just as addictive as Caffeine, Nicotine and drugs such as Cocaine and Opioids. We are, in fact, hard-wired to crave Junk Food. OREO Cookies have been proven classically addictive. Even a cat in Australia became addicted to McDonald’s food – hooked so hard that it underwent more than a week of withdrawal when ‘rescued’ by a McD’s employee. It stands to reason that shoppers will seek out their favourite junk foods if they are available anywhere in a given store.

Third, Dr. Obvious hastens to point out that folks under the stress of a long and enduring COVID-19 lock down will be even  more motivated to pig out on Junk (Comfort) food.

I guess we’ll have to see what the results of a POS ban on junk in Berkeley Food will be. But I tend to agree with Dr. Obvious, that cravings – particularly insidious, unconscious ones – will win out over conscious common sense faced with the temptation to indulge in Junk Food…