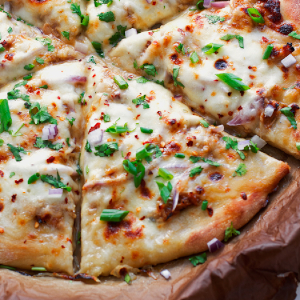 Well, here we are at ‘Hump Day’ of another week working at home while the pandemic rampages on into a second wave. I’ve been reading all over the Internet that bloggers like me are exhausted, and many are complaining they’ve run out of new or novel recipe ideas, for cook-at-homers like you… 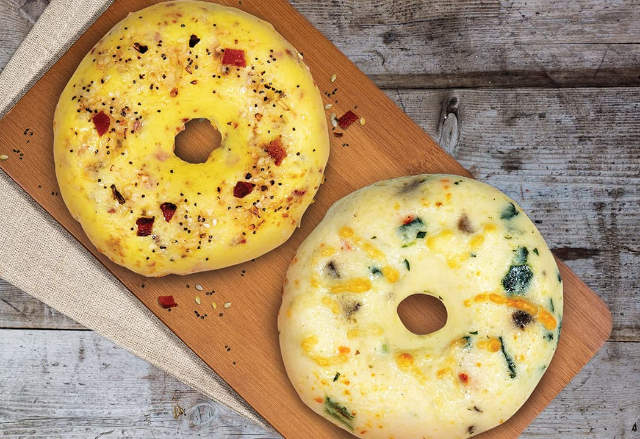 Eggy ‘Bagel Halves’ – the basis for our ‘Inside Out’ Breakfast Sandwiches…

I decided to try to turn things I see online or elsewhere on their heads and see what I get. Some of the notions that emerge from this process are absolutely genius – while others are definite Dodo birds.

I came across a few seeds for my flip-flop idea garden while clicking around seeking inspiration earlier this morning. Nothing. Nada. But, then, I saw a sidebar story – one of those videos that show someone’s hands from above mixing up and cooking on fast forward – and thought: Why not? There was no real recipe quoted, just a running list of ingredients and procedure steps compressing a 20-minute prep into about a minute and a half.

How about Beans ‘n Cheese?

Great idea – substituting Beans for Mac in a tweaked Mac and Cheese recipe!

Boil up some Beans of your choice until just tender (or use canned).

Layer Beans in a well-greased casserole dish with a shredded melting Cheese such as Jack, Cheddar or a blend thereof, topped by Crispy Bacon pieces, diced Onions, diced Diced Sweet Peppers. Maybe a handful of Kernel Corn (frozen is fine).

Top with a final double-layer of Cheese.

Just scoop out piping hot into a Soup bowl with a big serving spoon. Go ahead and garnish with chopped Parsley or Cilantro, and/or Green Onions.

You can serve this over Rice to provide a Complete Veggie Protein, rendering it a complete one-pot meal.

NOTE: This is NOT intended to be a Tex-Mex dish. So no hot Tex-Mex Spices, nothing overtly Red. No Tomatoes!

But you could add Cubed Leftover Chicken or Turkey, or Ham, like you might in regular Mac and Cheese.

Frankly, this one is the nifty notion that got me started on my present course! Try this:

Get yourself a Doughnut mold pan and grease heavily, or spray well with Cooking Spray.

Bake at 300 F – 325 F until a tooth pick comes out clean. Top of Eggs should be lightly browned at most and will be subside to approximately flat once removed from the oven for a few minutes.

At the same time, bake Frozen Hash Brown rounds or squares until warmed/cooked through.

Brown Sausage Patties on a flat pan in oven or a fry pan on the stove top until completely cooked through.

Reheat in Microwave for 20 sec. or so if needed.

Not an original idea, I’ll admit, but clearly a member of the ‘upside down’ recipe family. Just Google ‘Blonde Pizza’ or ‘White Pizza’ for hundreds of recipe suggestions. (See photo, top of page.)

My fave version is the one that uses Creamy Cheese Sauce for a base (rather than Marinara).

Top with cubed or shredded leftover cooked Chicken or Turkey. Or scramble up some Ground Turkey. Make sure to season the Meat with Salt and Pepper, as you normally would.

Top that layer with White Cheddar or Jack Cheese, Diced Peppers (Sweet and/or Hot, as desired), and diced or thinly slivered Sweet or Red Onions.

Top with one more layer of Cheese.

VARIATION: Start with a layer of Bacon Ranch Dressing in place of Marinara.

Drizzle with your Fave BBQ Sauce.

Next, add a layer of your fave ‘White’ Meat as above.

Sprinkle on a layer of White melting Cheese like White Cheddar or Jack.

Add a layer of diced Veggies as above, but including chopped Olives to taste and Diced Tomatoes if desired.

Finish with the same double layer of Cheese as above.

In a large sauce pan, start with one or two or more cans (enough to make the appropriate volume of Chili for the number of diners you want to serve) of Cream of Chicken Soup (the Ready-to-Eat kind; not condensed. DO NOT add any Milk or Water at this stage!)

With the heat on low, add any of the Meats suggested for the Blonde Pizzas, above.

Stir in any or all of the same Veggies you would add to a regular Red, Hot Chili. Do NOT add any hot Chilis or Hot Spices.

Now… Add a teaspoon (or more to taste) of the Herb and Spice blend you would normally add to your favourite Turkey Stuffing.

Stir the whole mixture gently by well to incorporate all ingredients evenly.

Turn up heat to medium and simmer until the Chili is bubbly around the edges.

If the Chili is thicker than you’d like, stir in just a couple of tablespoons at a time of Milk or Water.

Taste for Salt and Pepper and adjust if necessary.

DO garnish with shredded White ‘pulling’ or melting Cheese and some chopped or torn Cilantro or Parsley.

The coronavirus has served us up a great big curve shot; let’s hit back with something just as big, with an unexpected spin on it – and have some fun at the same time. Game, set and match to you!