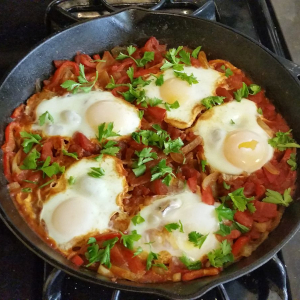 COVID-19 Lock Down Cooking Fun: And An Egg On Top!

I was scanning my vintage DVD collection last night when I came across my Complete Marx Bothers. Unbidden, the first thing that popped into my head was the scene in A Night At The Opera when the Brothers order a mammoth meal aboard the ocean liner, specifying Eggs with everything…

After a long speech to the steward, Groucho adds, “And a Duck Egg!” End of order. Well, there may be more truth in that mocking scenario than meets the eye. I can’t think of any more versatile component for a breakfast, lunch or supper than an Egg. And that’s just my reflexive hereditary Anglo-European take. The Asian culinary traditions have much to contribute as do the Hispanic.

There’s also the Vegetarian angle. If you’re a Vegetarian who allows yourself Eggs, you can bolster the Protein content of just about any Veggie meal by adding an Egg – Fried/Baked on top, tossed in like a Hard Boiled Egg in a Cobb Salad, or Stirred in like a beaten Egg in a bowl of aromatic Egg Drop Soup.

And there, in fact, are three of the classic applications for added Eggs that most us are already familiar with. But there’s more!

A dish I first came across when researching a presentation for my culinary school communications course is a good pace to start exploring. While we might consider it mysterious and exotic.

I refer to the Mediterranean favourite Shakshouka (see picture, top of page), described by Wikipedia as, “a dish of eggs poached in a sauce of tomatoes, olive oil, peppers, onion and garlic, and commonly spiced with cumin, paprika, cayenne pepper, and nutmeg. The dish has existed in Mediterranean cultures for centuries.” Those cultures are primarily in North Africa and the Middle East, where the former Ottoman Empire is pegged as a likely place of origin. There are as many specific recipes for Shakshouka as there are cooks who make it. Just Google the word for some prime examples.

In Mexico, they have Huevos Rancheros. It might be described as a distant relative to Shakshouka. The basic recipe is simple: Eggs Fried, or simmered atop a pan of cooked Salsa, served on a bed of warmed Tortillas.

Indonesian dishes often come with a Fried Egg on top. The one you might be most familiar with could be Nasi Goreng: Simply Fried Rice with Sweet Soy Sauce, Onions, Shrimp Paste, Chilis, Garlic and Chicken. And, of course, a Fried Egg on top! Serve a platter of Wedges Tomatoes, Sliced Cucumbers and Lime Wedges on the side. It’s a staple in its homeland, and some Indonesians eat it every day.

Thailand has a famous Noodle dish you’ve probably heard of, if not tried. Pad Thai is one of the less-spicy Asian Egg dishes and is, in fact, a nationally-loved street food in its homeland. Wikipedia sums it up as: “typically made with rice noodles, chicken, beef or tofu, peanuts, a scrambled egg, and bean sprouts, among other vegetables.” Those ingredients are Wok-fried and finished with a Pad Thai Sauce, served over Thai Rice, and topped with a Fried Egg. The Sauce is simple: Fish Sauce, Vinegar, Sugar and Tamarind Paste.

Indian cuisine has literally dozens of distinct regions across the subcontinent, and all seem to have their own Egg specialties. Indian Baked Eggs (only superficially similar to Shakshouka) is a general favourite in the Northern regions and Indian Scrambled Eggs (Eggs Bhurji) are well-known and enjoyed throughout the south. The former tends to be spicy, the latter milder and better suited to breakfast.

You’ll find literally thousands of Fried Egg dishes that are more or less ‘native’ to the cuisines of North America its source cultures. When was the last tine you had Eggs Benedict? Have your kids ever had ’em?

.. And discover some of the other dishes which feature a Fried/Poached/Steamed Egg on top, and have some fun!