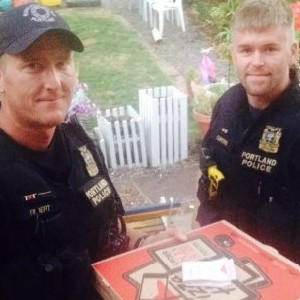 This is just a little ditty à propos of a recent Yahoo post. Seems some of Portland Oregon’s finest took it upon themselves recently to place special emphasis on the universal law enforcement motto: To Protect and Serve. Well, at least the ‘Serve’ part… There was this accident involving a pizza delivery guy, see… 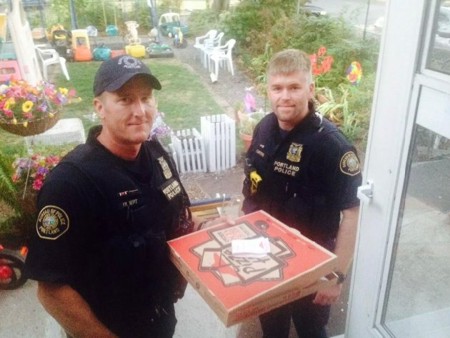 To Protect and Serve – Pizza!

…And the guy’s car was wrecked and he was apparently pretty shaken up. So two of the police officers who responded to the crash took pity on him, knowing he would be missing his tip for the multiple deliveries still waiting in his crumpled back seat, not to mention incurring the wrath of his boss. The Boys in Blue offered to expedite the remaining Pies in Red Boxes. One of the shocked customers thought to take a phonecam shot (above) of the crucial moment, when the pizza arrived at his door.

“Community policing at its finest!” wrote one commentor on the post.

But the icing on the cake (just to keep things culinary, here) was the wealth of comments from other folks who had experienced adversity and been accorded a first response above and beyond the call. Truly heartwarming – like a bowl of home-made Oatmeal on a cold January morning!

Oh, yah: The pizzas were about an hour late, but the Pizza Guy suffered only minor injuries…