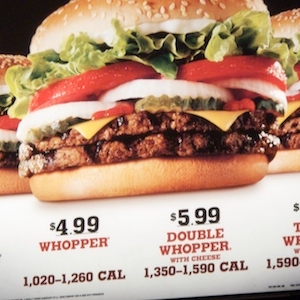 Ontario, the Canadian province where I live, will require chain restaurants with more than 20 locations to post calorie counts for their menu items along with other specs starting next year. It’s has been done elsewhere already, and it’s proven to be a real eye-opener – and choice changer – form some… 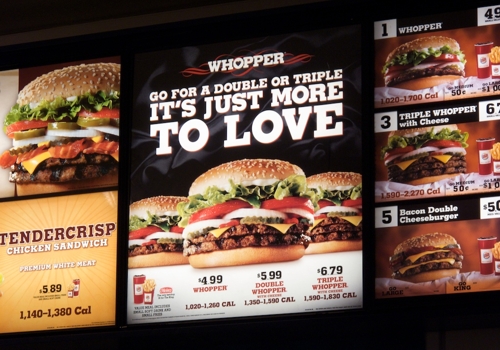 Most chain restaurants already make available the usual dietary information about their menu items. That includes the ingredients list, with quantities per serving. The one thing nobody talks about in this forum is the Calorie count. But that will soon change, at least in the jurisdiction where I live, Next year, it will become mandatory, by law, for all chain restaurants with more than 20 locations to post the calorie counts for their menu items. Not just make available – post!

That move is designed to inform people about the potential weight-gain effects of what they’re about to eat. The hope is that folks will think twice before ordering something that might compromise their health. Not to mention to further burden the already stressed healthcare system.

But the front-and-centre posting of calorie counts may also hurt business at restaurants whose menu items tend to be heavy on the Fat and Sugar, if the move discourages diners from eating there, or even from eating as much as they otherwise might.

How has the public reacted?

In New York city, where calorie counts have been posted for a while, now, the reaction is divided. Some diners say they’ve been gob-smacked by the calorie counts for some of their favourite indulgences and changed their ordering habits. Others say, “So what?” They eat out – and eat extravagantly – with the intention of indulging their dietary passions. Others simply rationalize that eating those high-calorie menu items they love hasn’t hurt them yet, so why sweat it?

An early survey by Stanford Business School based on Starbuck’s transaction records from several major U.S. cities showed that posting calorie counts for all regular menu items resulted in an overall reduction in calories of about 6 per cent per order. We’ll follow this issue…

One thing is for sure…

It doesn’t take much for chain restaurant menu items to equal or surpass the daily recommended calorie count for healthy active adults. That around 2,000 calories a day.

…That’s already just a hair under three-quarters of your daily calorie allotment!

Want to start piling on the calories early in the day?

… Which puts you above half your daily calorie allotment! All before 9 a.m.!

We’ll have to wait and see what effect the posting of calorie counts for chain restaurant menu items has on diners and the industry.