Walnuts May Be Healthier Than We Think

We all know, by now, that Walnuts and Walnut Oil are good for us. Walnuts have been credited with a number of health benefits over and above those attributed to Nuts in General. Now, scientists say they’ve discovered that regular consumption of Walnuts can benefit our essential gut bacteria… 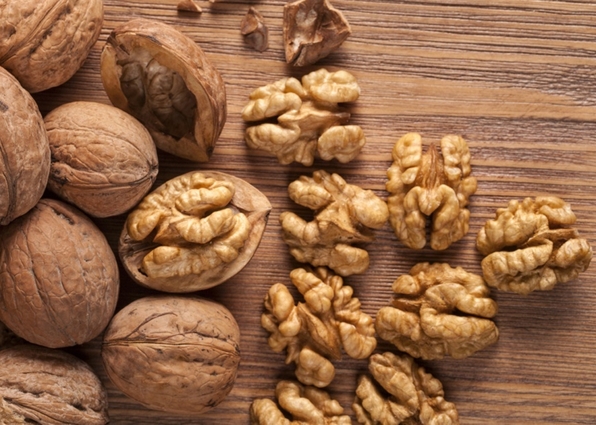 Walnuts: Whole and shelled. Good for you in so many ways!

A new study, published in The Journal of Nutritional Biochemistry, suggests that regular consumption of Walnuts can change our essential gut bacteria in multiple ways that benefit our health. Eating walnuts has already been associated with reduced cardiovascular disease risk, slower tumor growth in animals and improved brain health.

Dr. Lauri Byerley, Research Associate Professor of Physiology at LSU Health New Orleans School of Medicine, reminds us: “Walnuts have been called a ‘superfood’ because they are rich in the omega-3 fatty acid, alpha-linoleic acid and fiber, and they contain one of the highest concentrations of antioxidants. Now, an additional superfood benefit of walnuts may be their beneficial changes to the gut microbiota.”

Just generally good for you…

In mouse studies, researchers found that levels of several beneficial bacteria including Lactobacillus increased when subjects were fed Walnut extracts. The bacteria were also stronger and moire active.

“We found that walnuts in the diet increased the diversity of bacteria in the gut, and other non-related studies have associated less bacterial diversity with obesity and other diseases like inflammatory bowel disease,” Byerley told reporters. “Walnuts increased several bacteria, like Lactobacillus, typically associated with probiotics suggesting walnuts may act as a prebiotic.”

(Prebiotics are dietary substances that selectively promote the numbers and activity of beneficial bacteria.)

The researchers conclude that the reshaping of the gut microbe community by adding walnuts to the diet suggests a new physiological mechanism to improve your overall health.