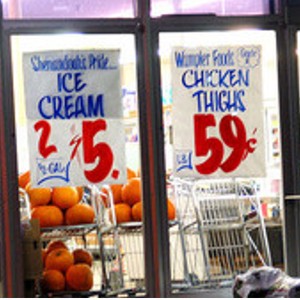 Supermarkets and food manufacturers use a number of tricks and techniques to maximize their profits on the fresh and processed foods you buy. Some are old chestnuts that we should all know by now. Others are newer and more insidious. Some can work in your favour! 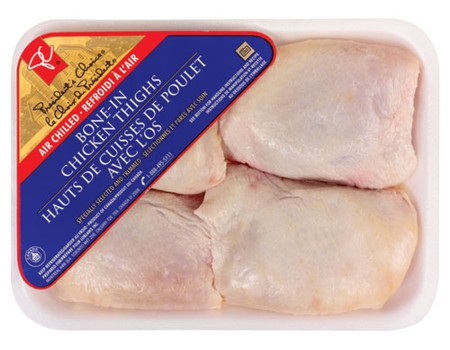 Would you pay more for chicken because it has a premium-brand label
or because it’s not pumped full of extra salt and water?

An oldie, but they still do it. Food processors from breakfast cereal makers to candy bar hawkers to salty fried snack mongers (potato chips, cheese puffs, etc.) all give you huge boxes and bags which, on opening, turn out to be, maybe, only a little more than half full. Remember that great big, gorgeous box of Valentine’s Day candy that turned out to have only about a dozen sweeties in it? Classic. Manufacturers still do it because it’s human nature to buy for looks, not necessarily for substance.

That’s why the weight of the product is so prominently displayed on the package. Technically, legally, they sell their wares by weight rather than the physical size or volumnar capacity of the package. So you can’t nail them for fraud. They also print prominently on the package that, “Product may settle during shipping’. Okay. Maybe a little.

On the up side, kudos to the salty snack makers for a relatively recent development that really does have a benefit: Most potato chip makers now puff a blast of air into the filled bag just before sealing it. That inflates the bag firmly, which helps keep the chips from being crushed during shipping and handling. Chip Lovers rejoice! All others, be sure to carefully check the weight of different products to see what’s the best buy.

If you haven’t guessed, yet, ‘deceptive packaging’ was the main reason behind the rules, now in place in most jurisdictions, requiring comparison pricing notes on supermarket shelf tags, based on cents-per-100-grams.

Marketing geniuses have long known that, simply by giving a plain product a fancy name and putting it in a fancy package, they can make it seem to be more desirable and worth more money.

The cosmetics industry is a prime example of this sort of thing: A lipstick – any lipstick – costs $1. to $2. to make but may retail for anywhere from $5. to $75. or more. It all depends on the brand glitz, the package and the sales message. Cover Girl hit it on the head with: “Why? Because you’re worth it!”

There’s a cosmetic marketing blitz on right now in which the product’s makers claim their $15. face cream outperforms not only $25. creams but $50., $100. and $200 creams! So why are the more expensive creams worth their price? Maybe they’re not! Ya think? Me, I do what I’ve always done: Wash my face twice a day with soft, non-perfumed soap and apply a good moisturizer. My friends (and even strangers) say I look 20 years younger than my calendar age! I have never spent more than $12. for a jar of face goo. You shouldn’t either.

And the same principle applies to food.

Example: Sour Cream. Compare big-brand containers of the same weight to No-Name or House Brand equivalents, with the same percentage of butterfat. The No-Name and house brands must meet the same manufacturing standards and composition as their pricier counterparts, but they are, basically the same product. The only palpable difference may be added flavouring or inclusions such as fruit or nuts. Similar standards exist for most dairy foods, including Milk, Yoghurt, Ice Cream and most soft cheeses. Sugar is sugar. Salt is salt. Eggs are eggs. Flour is flour. Corn Starch is corn starch. Rolled oats are rolled oats. Rice is rice. Get it?

You’ll save a bundle buying cheaper equivalents in many areas of your shopping list where you’re talking commodities rather than prepared, processed foods.

Loblaws started this popular trend more than 20 years ago when the company’s corporate President of the day, Dave Nichol, launched his first ‘President’s Choice’ product line, exclusively at Loblaws.

Class-consciousness was one marketing ploys he used to make the stuff seem more desirable and worthy of a higher price. So, of course, was the naming: ‘President’s Choice’. (Implication: You wanna live like a President? Buy this!)

They also brought out products which had no direct competitors among the major name brands. An exclusivity ploy. Remember the first place you ever saw a Molten Lava Cake? Bet it was the PC Report flyer!

Yet another gimmick Nichol used to pump the PC brand was to launch premium versions of common products, like Chocolate Chip Cookies, against competing brands and undercut the opposition’s prices. How to make friends and influence people!

Today, every supermarket chain has its version of ‘President’s Choice’. Whether its ‘Selections’, ‘Compliments’ or whatever, it’s all based on the PC principle. All to convince shoppers to pay more for things because they’re perceived to be ‘better’ or somehow exclusive.

This practice, which started in the 1970s and ran rampant through the 1990s, still shows up today, from time to time. Poultry producers would ‘enhance’ their birds before packaging by pumping in water containing salt and other additives, using syringes, ostensibly to make them more tender and tastier. Maybe so. But it also increased the weight! And, as we all know, meat is sold by weight at all stages of the production and sales chain. That meant more profit for the producers and more, in turn, for the supermarkets.

But, when it became commonly known that water pumping was going on – customers, especially those in the foodservice industry, complaining about outrageous shrinkage! – producers came up with a plan: Sell regular, pumped meat at regular prices and charge a premium for ‘air chilled’ meat!

Today, the best way to protect yourself is to always look for the descriptor, “air chilled’ on the label when you are buying poultry. It may cost more, but at least you’re getting all meat and no excess water.

This scam I hate more than any other! When you get a really good deal on skin-on, bone in poultry, you may not be getting such a good deal. And you only find out after you get the stuff home and open the package. Like the water pumping scam, this dodge involves increasing the weight of the package. This is usually done by leaving huge flaps of skin attached to the cuts you are buying and tucking them under the meat you see. I’ve had some packages that were more than 50 per cent waste, after trimming the bones and all that extra skin! That’s just not right.

The remedy for this is for all of us to take back packages that are padded and complain to the store manager. Not the meat manager – it was his idea to pad the packages in the first place! And mention your disappointment to all your friends! Facebook has its uses…

Some supermarkets use different units of weight to price different goods. Some foods are priced per 100 grams; others by the kg. Still others (particularly in the meat sector) are priced by the pound. If $30. per kg sounds too expensive, they’ll default to $3. per 100 grams. If $15. per kg sounds too pricey, they’ll ‘reprice’ to $5.99 per pound. It can be downright confounding! Just remember to always work in the same units and convert prices expressed in other units to yours. Use the calculator app on your phone. That’s what its there for!

This concept takes in a wide range of gimmicks the food sellers use to get you to buy more and spend more: ‘Two for one’, ‘Buy one, get one half price’, ‘Buy two, get one free’, ‘Two (Three, Four, or whatever) for $X.’, etc.

Always take a moment to figure out what the actual unit price of whatever you’re buying works out to. Sometimes you get a deal, sometimes you get ripped. Sometimes you don’t get the deal you thought you were getting. And never forget that, if you don’t need it, or don’t have a suitable place to store it, don’t buy it! If you get a great ‘3 for 1’ deal on something and two of them go bad in the bottom of the fridge, you just ripped yourself off!

You’ll often see plastic wrapped foam-tray meat cuts with ‘Special’ and ‘Clearance’ stickers on them, offering ‘1/3 off’ or ‘1/2 Price’. A closer look will reveal that these were probably packed several days before and the supermarket wants to get something for them rather than trash them and write them off completely. Sometimes, these cuts are okay, especially if you want to use them the same day and they have not been packaged any more than two days before. But, generally, these ‘Specials’ are not very special at all. My advice: Steer clear!

You can really cash in on true specials in the meat department, especially if you have a large freezer!

Example: Whole Eye of Round. Sometimes as low as $1.99 per pound ($4.39/kg) Okay. It’s 7 or 8 pounds and will challenge the capacity of your largest roasting pan. But who says you have to cook it all at once? Take it home, cut a couple of nice tip toasts off the ends and slice the centre for nice little steaks (you determine the thickness!), Fajita meat or whatever. Freeze as individual cuts or in portions in heavy duty freezer bags.

Example: ‘Club Pack’ poultry specials. You often seen packs of 12 chicken thighs (or legs or wings), or 4 to 6 breasts, for a ‘special’ price that turns out to be about half the usual price. Take them home and freeze them in portions – i.e.- pack four in each freezer bag for a meal for a family of four.

Train yourself to spot real bargains and exploit them! And always keep an eye out for loss-leaders. Those are popular items that supermarkets buy in bulk to get the lowest possible price from their suppliers, and then sell them to you virtually at cost, as a means of getting you into the store. Milk, eggs, butter, and house brand toilet and facial tissue are often used this way. They have them in the meat department, too! Just keep your eyes wide open and your calculator at the ready.

In future installments of Food Tips, we’ll look at other ways to get more and better food four our bucks!