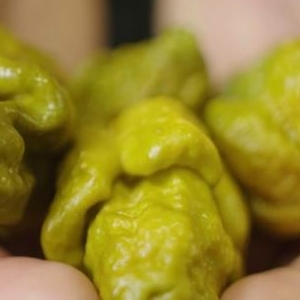 It used to be that we’d hear about the discovery of a new, even-hotter Hot Pepper once in a decade. Then, one every couple of years. Now, it seems a new contender for The World’s Hottest Pepper surfaces every few months. My question is: Why do we need man-made, ever-hotter Peppers? 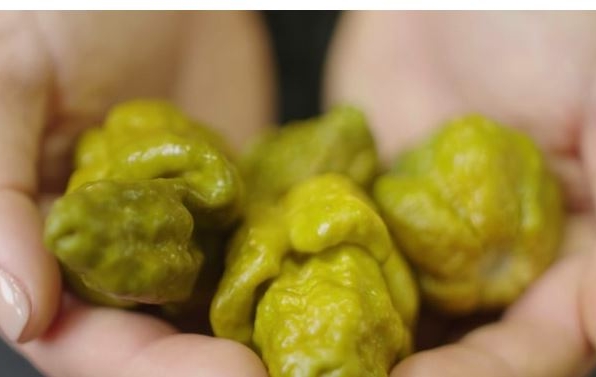 Pepper X: It doesn’t look like much, but it’s the hottest Pepper in the world. For now.

The last time we hear about a new ‘Hottest Pepper’, it was the Carolina Reaper, from the greenhouses of South Carolina heat freak Smokin’ Ed Currie. The Reaper clocked in at between 1.5 million and 2.4 million Scoville Units – the official scale used to compare Hot Peppers. Your common and Garden Jalapeño makes a mere 2,500 – 5,000 on eh Scoville Scale.

But… Currie’s latest creation, known only by the ominous moniker ‘Pepper X’, tops even the Reaper registereing a potentially lethal 3 million Scovilles!

What do you do with a Pepper that hot?

Well, Smokin’ Ed and friends did brew up a Hot Sauce with some ‘X’ Peppers and you can find out more at Heatonist.com, online purveyors of HGo9t Sauces and only Hot Sauces. It’s a thick, light green sauce which I can’t imagine ever passing my lips, even diluted. Hold the bottle away from your face when opening. Do not attempt to smell. Eye protection recommended. Wear gloves. Etc.

Now, these ultra-hot Peppers can hurt you and even kill you. They use them in Pepper Spray, but even those Peppers are nowhere near as powerful as The Reaper or Pepper X. So what do you do with them?

It turns out that a number of Hot Pepper breeders have been approached by representatives of various governments about weaponizing the things. Really. But wouldn’t that be a Biological Weapon? Aren’t those outlawed by international convention? Legal or not, that’s about the only use I could come up with for these ultra-hot Peppers.

I have decided to put the Ultra-Hots into a new category: Novelty Foods. They have minimal nutritional value, are virtually impossible to eat and can actually harm or kill you. There’s no sane reason for these man-made monsters to exist, except to get their makers into the Guinness Book of Records. Maybe they’re not really food, anymore, when they get that far out. But people like Smokin’ Ed Currie keep breeding Ultra-Hot Peppers and making Hot Sauce with them, suggesting to the gullible that it’s okay to eat them. I’m waiting for the first story to come down  the food news wire about somebody suing Smokin’ Ed or one of his ilk for burning out their gullet.