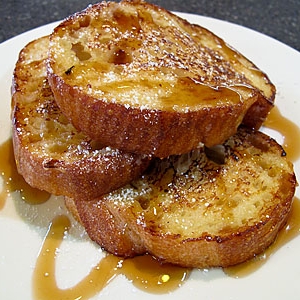 To celebrate a weekend sleep-in morning, I often make French Toast for brunch for Mom and me. Sister Erin – she of the touchy tummy – usually opts out, claiming there’s too much butter. Nonsense! You can’t have too much butter when cooking French Toast! And that’s Tip #1! 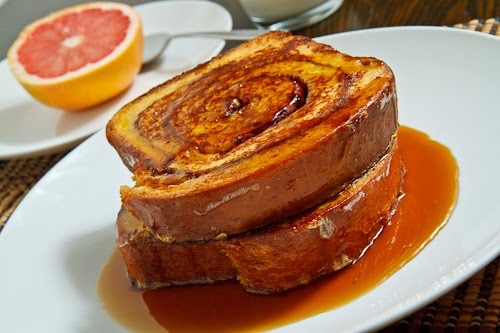 Try changing up the bread… Like the Cinnamon Bread above,
or Raisin Bread! Challah is also amazing!

To recap and enlarge upon French Toast Tip #1… Always cook your French Toast in Butter, for the flavour. Never turn up the heat too high or the butter – and your Toast – will burn. Medium should be just fine. If you’re uncomfortable with plain butter with respect to the danger of burning, add a couple of dashes of a clear, flavourless Oil – like Canola – to slow the butter down. But don’t be afraid to use a lower temperature: as long as the milk solids in the melted butter are just frothing, you’ll still get beautiful, golden finish on your Toast. Add a pat/tablespoon of fresh butter before starting each slice.

French Toast Tip #2… Always beat your Eggs well, allowing one Egg per slice of Bread. Give them a good whisking to break up the Whites as much as possible and then add to your Milk/Cream mixture. Always add the eggs to the Milk/Cream, not the other way around!

French Toast Tip #3… Always use the richest Milk or Cream you have handy. The richer, the better! This is important for several reasons, including the fact that richer Milk/Cream has more fat in it and will blend more smoothly with the eggs. Allow one teaspoon per Egg.

French Toast Tip #4…Which brings us to the garnishes! Here, we’re talking about Cinnamon, Ginger, Nutmeg, Allspice or whatever you like to add to your French Toast. Always add the powedered Spices or Sugar to the Milk/Cream to ensure that they are evenly distributed in the final Milk/Egg Dip. When evenly blended with the Milk/Cream, add the well-beaten Eggs and whisk thoroughly. It’s good to get some air incorporated in the Egg Dip.

French Toast Tip #5… Pre-heat your pan for at least 5 minutes – 10 is better – to ensure proper cooking of your French Toast and uniform golden finish through the whole production run. I usually get the pan on with an inaugural tablespoon of butter before I start mixing up the Dip and slicing the Bread.

French Toast Tip #6... Always use thick-sliced Bread to ensure you get maximum absorption of Egg Dip in each slice of Toast. Some French Toast Afifionados insist that you must use slightly dried out, day-old Bread to ensure max absorption. I believe that choosing a nice, medium to coarse textured bread is the key. Lots of room in those little bubbles for Egg!

French Toast Tip #7… Don’t over-cook your French Toast. If it’s a beautiful golden brown on the outside, it’ll be cooked through the middle. A minute or two per side in a properly-preheated pan is all it takes.

French Toast Tip #9… Pierce your French Toast on the plate with your fork before pouring the Syrup over it. This will allow the Syrup to ooze down into the centre of each slice and maximize  its effect on your palate!

French Toast Tip #10… Do have at least two slices of French Toast whenever you make it. I can never stop after just one!

There you have it! Now get crackin’!