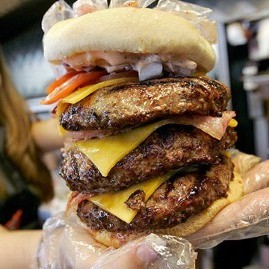 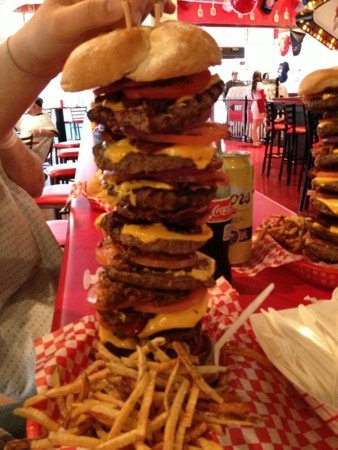 Morgan Spurlock, who first came to prominence for his McDonald’s Restaurants exposée Supersize Me, has another project ready to launch. This time, he’s going beyond Gluttony to examine all Seven of the proverbial Deadly Sins in a series of the same name on Showtime.

In his first episode – focussing, perhaps predictably, on Gluttony – he talks to Jon Basso, owner and mastermind of what may be the world’s most unhealthy eatery, the Heart Attack Grill (HAG) in Las Vegas, NV. That’s the place that serves menu monstrosities including the Octuple Bypass Burger (pictured, left) for (US)$21.28. (Add 40 slices of bacon for just (US)$7.40 – ‘Plus 8.1 per cent tax for our wasteful government to squander’). And don’t forget the legendary (we are told) Flatliner Fries with Cheese and Chili for (US)$4.63. 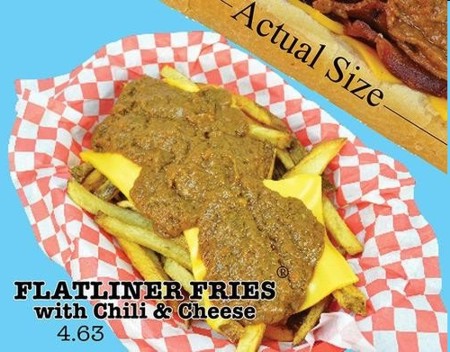 The headline for HAG’s online bill of fare seems to say it all: “Caution: This Menu Contains Nutritional Porngraphy!”

So what’s the deal, anyway?

Basso says, in the opening episode of Spurlock’s series, he’s trying – among other things – to bring attention to the burgeoning obesity epidemic in the U.S. (and many other western cultures) by satirizing fatties and their diets.

“Somebody has got to stand here and say, ‘Screw it. Wake up, world. You’re fat.’ No, I’m not going to call you ‘plus-size.’ I’m not going to say you’re ‘portly.’ No, you’re fat. Lose some weight, or just hurry up and die and be done with it.”

When we first heard about the HAG on Bob Blumer’s FOOD Network series, Glutton for Punishment, Basso got slammed for promoting bad eating habits and food items that could literally be deadly if consumed regularly in the doses he ‘prescribes’. Now, after the Glutton episode of 7 Deadly Sins aired this past weekend, he’s being labelled a fattie-hater’!

So… It’s a lose-lose situation!

Some random facts about Basso…

All the foregoing info, however, should be taken in context of some random but important facts about Jon Basso and his pre-HAG career:

Two of Basso’s high-profile adherents have actually died of heart attacks after eating in his restaurant. One was his business’s TV commercial ‘presence’, 570-pound, 29-year-old Blair River, and a man Basso calls his one-time best customer, John Alleman.

Nevertheless, Basso insists: “For every Alleman who dies, we can hopefully help 10,000.”

2014-08-12
Previous Post: Porchetta: Go off on a Tasty Italian Tangent!
Next Post: New Canadian Fair Food Breaks all the Rules