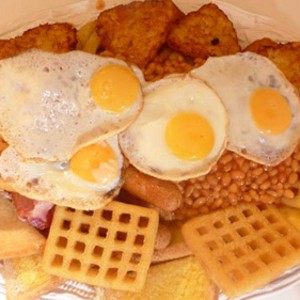 It was, I suppose, just a matter of time. We’ve seen the Millennial Menu Madness Bug infect the Burger Sector and the Pizza Sector. Now, it’s wormed its way into the Breakfast Sector – with potentially devastating results, if early manifestations of the new fad are any indication… 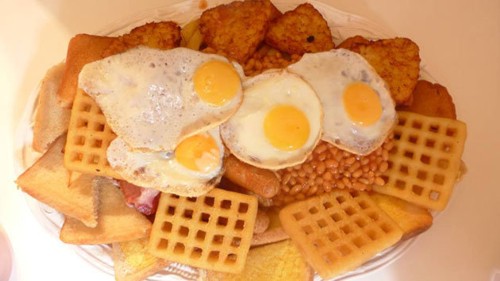 As often happens, I caught wind of this one via a whacky Yahoo! post. And, not uncharacteristically, the early adopter we will herein profile hails from Over ‘Ome.

Yup. Another nutty Brit has come out with another nutty promotion, not so much verging on the extreme as pushing the envelope. The maniacal menu item is called The Hibernator, because anybody who managed to finish it will probably want to curl up and sleep for a few months afterwards. It’s a heavy proposition, in more than one respect.

The 8,000-calorie monster contains the following:

So, what the hey?

It’s just another expression, in another foodservice niche, of the Menu Madness disease that has been infecting the industry for the past couple of years. Driven to desperation by ever more crowded market niches, proprietors are turning to silly and – sometimes – downright dangerous stunts to raise their eateries’ profiles above the noise.

The dangers inherent in this whacky promotion are minor compared to some. We have previously chronicled the escalating Hot-for-Hot’s-Sake War among Pizza and Burger vendors, all desperate to stand out from their respective crowds.

So don’t be taken in. But take a moment to pity the other poor breakfast joints in Cheshire, England, who will now feel pressured to follow in the footsteps of The Hibernator’s inventor, Mark Winder, proprietor of the Bear’s Grill Café in the town of Congleton and come up with even-more-ridiculous promotions just to get the public’s attention for the next 15 minutes.

There are better ways to make your eatery stand out and draw a mass of appreciative adherents. I’ve talked about them before, so I won’t go though it all again, here. I’ll just make another impassioned plea for reason and reasonableness among the beleaguered masses of small restaurant owners around the world who are suffering under so much stress these days.

And remember: Breakfast is not a contest or a race!