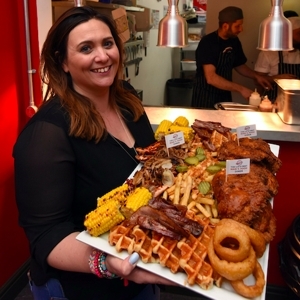 A mammoth platter of Chicken and Waffles – and a whole bunch of other stuff – from Darlington, County Durham, in the UK, has claimed the Fabulous Food Blog title of Most Excessive Menu Item. You have to run down the ingredients list to believe it. I’ll let you guess how many Calories the thing packs! 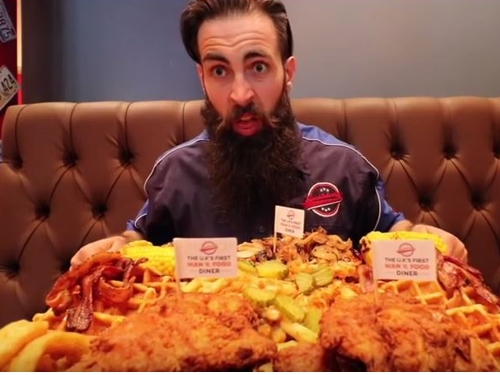 An eatery whimsically named Huckleberry’s, in the town of Darlington, is offering the largest-yet-seen mega meal with a challenge attached. It’s called the No Clucking Chance, more of a reference to the challenge than the food. If you can eat the whole thing in 40 minutes or less, they’ll give you £500. (That’s over (C)$950 Canadian and over (US)$730.) So far, nobody – not even All-England competitive eater Adam Moran – has been able to down the whole thing.

No Clucking Chance comprises a regular encyclopedia of comfort foods:

And that doesn’t count Sauces, Syrups and other trimmings.

This is nothing more or less than Menu Madness gone wild in response to market niche crowding which has reached severe concentrations. Don’t say I didn’t warn you!

Oh, by the way: The No Clucking Chance platter weighs in at over 10,000 Calories – five times the daily recommended Adult intake!

2016-05-28
Previous Post: Never Heard Of Tiger Nuts? You Will Soon!
Next Post: Blast From The Past: Grandma’s Biscuits