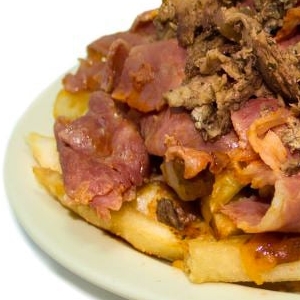 Menu Madness: DUI Fries Not What You Think

Menu Madness season seems to have leaked through to the new year. Or, maybe, it’s a year-round thing, now. Anyway… The latest candidate for cardiac-arrest-on-a-plate fame is called DUI Fries from Jim’s Burgers in La Puente, California. But it’s not what you probably think! 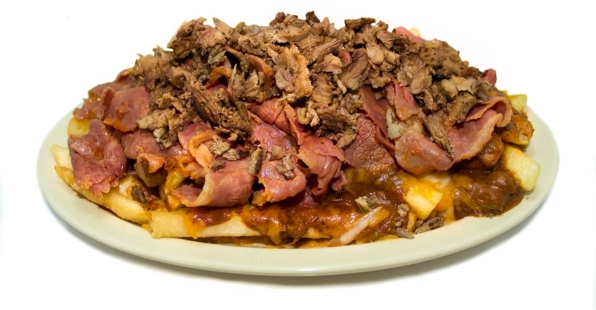 DUI Fries is just one example of a recent trend to excessively-loaded fries. In moist of these creations, the fries are, in fact, almost totally overwhelmed by the toppings. You usually get Cheese, Gravy, Chili and any number of cured or BBQed Meats. Other toppings can include ‘special’ Sauces and grilled Veggies. Actually, anything goes. One saving grace: I have not yet seen or heard of a loaded Fries dish that includes Ramen Noodles.

There’s no booze involved. The dish gets its name from from its creator, a cook at Jim’s Burgers some 10 years ago. ‘DUI’ stands for ‘Dino’s Ultimate Invention’. No word if he’s still staffing the flat top, but his creation lives on. And, at ten years old, it may have been the prototype of all the loaded Fried platters to follow. Which is one reason I am honouring it with a post.

The plate clocks in at at least 1,500 calories and probably has more than the your daily recommended allowance of grease, starch and protein. No Veggies except the Potatoes. Not even a couple of Dill Pickles to honour the Pastrami’s heritage. But I feel grilled/fried Brussles Sprouts would be the ultimate addition. Not only would they remediate the Veggie deficiency of the dish as it stands, they lift the Calorie count to the 2,000 mark, making it a full day’s nutrition in a single meal, something that most extreme indulgences can’t claim.

DUI Fries consist of a huge piled of fries topped with Chili, Cheese, Pastrami and Carne Asada. Hey! DUI Fries even qualify as Fusion cuisine! Burger joint owner Jim Pantazis says Dino got the idea to top Chili Cheese Fries with all the savoury meats they usually had on hand at the restaurant, “to give the customers their money’s worth.”

DUI Fries are unquestionably the progenitor of a whole generation of loaded Fries monstrosities. You can now get versions of the dish all across southern California that all contain Carne Asada and Pastrami along with whatever other ingredients their creators chose to add, to make them unique. DUI Fries defined a real, lasting regional favourite and, as such, deserves praise.

My personal take? Share this plate with two or three friends…