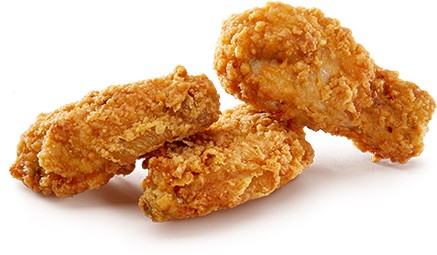 Talk about Food Flops of 2013! A recent online blog post on that topic pegged the short-lived McDonalds brainwave, Mighty Wings, as the third worst idea/product on its list. But that may be the least of the fast food giant’s problems with the product that wing lovers failed to flock to…

As you may recall…

McDonalds announced back in November that it was discontinuing some menu items due to poor sales and to make room for new seasonal items on its list. One of those was its so-called Might Wings, which were an attempt to break into the Hot Wing market from the bottom. Well, the break-in turned out to be kind of like tunneling back into jail!

One might speculate that McDonalds’ wing-loving customers were expecting – and wanted – the usual McD’s chicken experience in their wings, not the classic Tabasco-bathed barroom burn-out. Conversely, I somehow doubt you’d find real hot wing lovers going to McD’s for their fix.

One might say confidently that many McCustomers found the Mighty Wings just too hot – because that was what they told McWorkers in the stores and posted about online.

One might think that the McDonalds brain trust would have thoroughly tested the recipe with focus groups and test launches in selected markets before ordering a trainload of them from its suppliers. Seems that was not the case.

So confident was someone at McDonalds, in fact, in the success of the Mighty Wing that they ordered millions of pounds of them! We may assume that there was some kind of bulk-buy discount in that deal. But that saving could offset only a tiny fraction of the loss McDonald’s is facing, now that the product is off the menu and the company finds itself with more than 10,000,000 pounds of frozen, spicy wings it can’t sell.

McGod! What to do? Seems no other concern that sells wings has rushed in to take the surplus poultry off the corporation’s McHands, even at deep, deep liquidation discounts.

Strike One: If McDonalds’ customers didn’t like ’em, I have to assume that my customers wouldn’t, either.

Strike Two: Very, very few corporations in this tired, hungry old world could afford to take advantage of such a bargain. I mean… Where do you put them, for a start?

Strike Three: The only major outfits that would be remotely interested in the avian McOverstock are McDonalds’ major competitors. If I was a Burger King, Wendy’s or KFC executive, the last thing I’d do was help McDonalds get out of its big, deep, expensive, chicken-lined hole.

Modest Proposal One: Give them to food banks across the land. At a pound a person, they’ll go a long way to feeding the hungry and there are many ways that too-spicy wings can be cooled down. Pack a little sheet of paper with each box giving the appropriate suggestions.

McDonalds Benefits: A potentially-huge charitable tax write-off, cushioning the blow on shareholders who must be hotter than those wings about the situation right now. Not to mention an incalculable PR boost, which would compensate for all the bad press McDonalds has had in recent months and years about the quality of its food, its labour relations and its corporate procurement practices.

Modest Proposal Two: Reprocess the stuff, possibly by adding a generous coating of powdered cheese, or cheese flavouring in some sort of neutral binder like milk powder. That would help change the flavour profile, endow the wings with a whole new identity and cut the heat at least a little. Call them ‘Zesty, New Southwestern Cheezy Chicken Chews’ or something.

McDonalds Benefits: You’re no longer stuck on top of Wing Mountain in a Chili storm. And you’ve minimized your losses admirably.

Modest Proposal Three: (Disclaimer: This one may shock, appall and/or gross out some readers!) Take all those wings, run them through something like an industrial potato peeler to remove the chili-tainted crust and then send them through the pink slime’ machine.

McDonalds Benefits: A helicopter has come to take you off of Wing Mountain. You have a huge new supply or ‘mechanically de-boned’ chicken to turn into McChicken patties and McNuggets at minimal cost. You could also sell some or all if it back to the chicken producers (See: ‘cannibals’, Proposal Four), to help mitigate the Mighty Wings Fiasco financial loss. Farmers might be interested in buying the crusty ‘peelings’ for use as fertilizer.

Modest Proposal Four: (Disclaimer: This one is even more likely to shock, appall and/or gross out some readers!) De-crust the chicken pieces as in Proposal Three. Then, send the de-chilied chicken hunks through some kind of culinary wood chipper, and feed the resulting meal to chickens. They’re notorious cannibals, and the chicken mega-producers already feed the mulched beaks, feet and other ‘leftovers from the end of the packing line’ from one flock of chickens to their next batch. Cheap protein, and calcium from/for strong bones.

McDonalds Benefits: You make back at least some of your loss back on the sale to back chicken producers. Farmers might also be interested in buying the crusty ‘peelings’ for use as fertilizer.

My fee on this consult will be a modest 5%. At an equally modest $2. per pound valuation on the commodity in question, that’s a mere $1 million. In U.S. funds, of course. A bargain at the price!