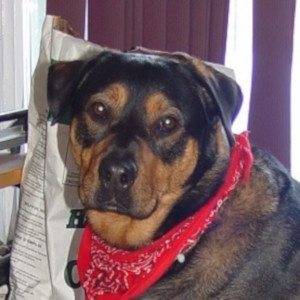 Sister Erin was surfing the web for dog nutrition info earlier this week and came across a long video (16 minutes) featuring a veterinarian who goes by the handle ‘Dr. Marty’. His goal is to produce the ultimate dog food, and banish what he calls the big three ‘dog health destroyers’… 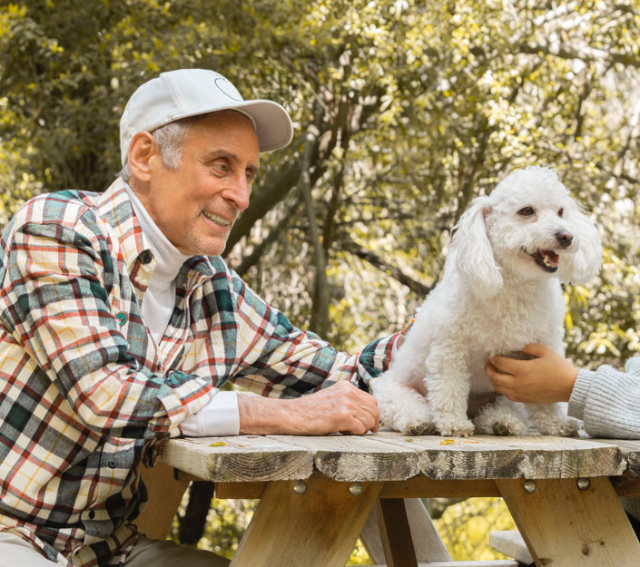 Dr. Marty and one of his many canine buddies…

Dr. Marty Goldstein has been a veterinarian for 45 years and claims that, over that time, and having treated tens of thousands of animals, he’s come up with as close to a perfect dog food formula as you can get. What dog lover wouldn’t want to hear more?

Goldstein started his personal journey of discovery about dog food by looking back – way back – to the dawn of dogs, to the ancient ancestor of all of today’s breeds, the wolf. “What do wolves in the wild eat?” he wondered. The answer was simple: Raw meat.

But what kind of meat? Mostly small mammals, who brought with them, via their stomachs, small amounts of fruits and veggies they had recently eaten.

So it seemed easy to come up with a healthy formulation.

Was anybody making such a dog food?

But the plot thickened quickly when he started looking at the ingredients lists on a variety of commercial dog foods. Only a few obscure boutique manufacturers were offering anything like the ultimate dog food he envisioned, and none came up to the standards he had set.

For a start, most of them contain a large proportion of fillers, such as soy, rice, barley and corn. And those grains, though they do technically contain lots of protein, don’t offer the kind of protein dogs are built to process and use. Nor do they contain the small but essential allowance of fruits and veggies that Goldstein prescribes. That rules out about 99 percent of the dry kibbles.

“You’ll never see a wolf snacking on a cob of corn!” the good Dr. tweaks.

Commercial foods also contain preservatives which Goldstein says can cause a whole raft of health issues for dogs including shortening their lives.

Another red flag in the ingredients list on your dog’s food is ‘meat byproducts’ or ‘byproduct meal’. That’s just a benign name for stuff like turkey beaks and feet: “Slaughterhouse waste. What’s left of  an animal after slaughter, and after all the cuts of meats for humans have been removed. […] That can mean just about anything!”

Finally, the good Dr. says most commercial foods, or at least some of their ingredients, are cooked which destroys vitamins and other essential nutrients.

(The flip side of that one, Goldstein notes, is that even the best meat-based dog foods need some supplementation to optimize their nutritional profiles. He particularly recommends Omega 3s.)

Well, it is, kind of. Especially if you’re not an animal nutrition expert. Fortunately, Dr. Marty has composed a handy digest of his recommendations.

And if you want to get the full story, with all Goldstein’s reasoning and rationalizations, watch the video sister Erin found, which sparked this post. You’ll be surprised by some of the things you learn, and grossed out by others.

It turns out that sister Erin, manager of all things canine in our little household, has been feeding our 4-legged burglar alarm, Riley the Wonder Dog (see photo, top of page), the right stuff all along. We get a raw meat natural-formula food in burger form from a small, local pet food outlet. The burgers are large by human standards, but one constitutes a whole meal for a big dog like Riley. They come in smaller sizes, for smaller dogs, too. Riley attacks his like a fresh kill, even before it has a chance to thaw out.

And the clincher is, you can also feed a version of this stuff to your cat(s). If you’ve ever watched a documentary about big cats in the wild (lions, tigers or cougars) you’ll already know that they eat their prey (and select prime cuts from it) the same way wolves do.

Dr. Marty has his own ultimate dog/cat food brand, and you have to order it online from his website. One advantage to his products is, they’re freeze-dried (NOT cooked!), so they have a very long shelf life. They’re also light in weight which minimizes shipping costs.

You owe it to your puppy pal(s) and his/her inner wolf to look into feeding natural-formula diets!