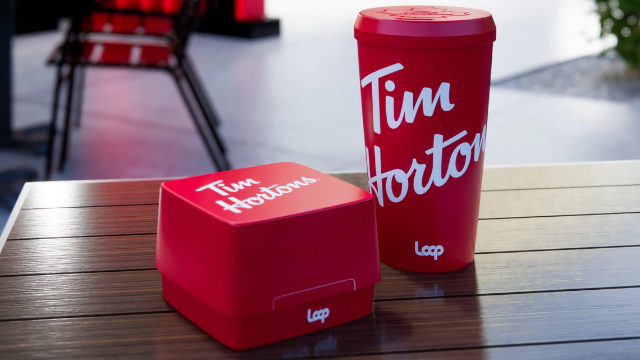 BK’s sister chain.Tim Horton’s, is also testing the new reusable packaging.
The little logo at the bottom of each packaging item is for
‘Loop’, the company that makes the stuff…

Wendy’s is replacing its current Homestyle Chicken Sandwich with a new Fried Chicken Breast Sammy, which the chain says is crispier, juicier, and more flavorful than its predecessor. The new Breast Meat cut is topped with Mayo, Tomato, Lettuce, and Pickles. All in all… The new Wendy’s offering closely resembles the tremendously popular Fried Chicken Sandwiches being brought out by other major players since Popeye’s caused major traffic jams and even a few minor riots when it launched a new Sammy in direct competition with the Chick-Fil-A classic.

Taco Bell débuts a companion for its popular Toasted Cheddar Chalupa, This year, it’s followed up with a new Black Bean Toasted Cheddar Chalupa: Everything you expect from a classic Chalupa and certified as Vegetarian, too. You get: Lettuce, Cheese, Tomatoes, Sour Cream, in a Chalupa Taco Shell that was toasted with Aged Cheddar. Available now at participting TB locations.

Papa John’s is bringing back its distinctive Jack O’ Lantern Pizza until Hallowe’en, at participating locations. The Thin Crust Pie features a Pepperoni border along with Pepperoni eyes and smile. Note: this Spooky Season Specialty comes uncut to preserve the visual integrity of its design through delivery.

Kool Aid, it could be argued, is definitely out of season by Hallowe’en. But not out of mind. The drink mix brand has created a line of Popping Candy for the Spooky Season. A treat that contains a hidden trick! And check out the brand’s full line of Hallowe’en stuff at: Shop.KoolAid.com.

BK is one of several sister companies that will begin testing re-usable food and beverage containers at selected outlets starting early next year. Customers will be offered a choice of traditional or re-usable containers when ordering and will be asked to pay a small deposit on re-usables at time of of purchase. Next time you’re at any participating BK location, bring back the undamaged re-usable containers for a deposit refund. It’s the latest step in BK’s quest to source all customer packaging from renewable, recycled, or certified sources by 2025.

… On what’s going to be making some of us fatter over the days and weeks to come. Be back here in 7 for another edition of Fast Food Week!