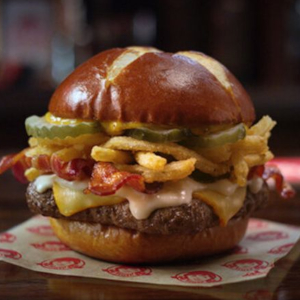 Wow! All the major Doughnut slingers are coming out his month with their Fall special menus – and they’re all pushing Pumpkin Spice Pastries and Beverages as hard as they can! For good measure, Subway is offering a ‘B2G1’ deal for Footlongs, and Taco Bell is cutting more main menu items… 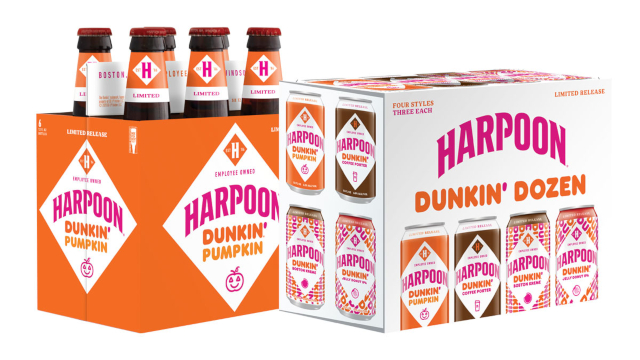 … And this time they’re stuffed with just about everything you can imagine. The Pretzel Bacon Pub Cheeseburger starts with a quarter-pound Beef Patty, Muenster Cheese, three strips of Applewood-smoked Bacon, Smoky Honey Mustard, warm Beer Cheese Sauce, crispy-fried Onions, and Pickles. About all they missed are Tomato and Lettuce, but they’re no longer in season… Meanwhile, the same Sandwich is also available featuring a Homestyle, Spicy, or Grilled Chicken Filet. The burger looks rally good in the official portrait (photo at top of page)…

That means ‘Buy 2, Get 1 Free’. And it’s been invoked to promote the chain’s appointment as official Sandwich Sponsor of the NFL. Free Sub must be of equal or lesser value than the first two (which you pay for). The deal is available when you order through the app, from participating locations.

We’ve recently been keeping an eye on COVID-19-inspired moves by Fast Food Joints to streamline their menus permanently in an effort to reduce costs and improve service. One such ongoing effort, by Taco Bell had been underway for some time before the pandemic struck as part of a post-shake-up rebranding program refocusing the Taco joint back onto its original core mandate. A year ago, the chain cut 9 menu items to de-clutter its bill of fare and is now cutting a dozen more, this round to make room for a selection of new Plant-based items. The Nation’s Restaurant News has this story with all the details…

We assume that a previous collab with Harpoon Brewery (a Dunkin’s Coffee Porter) was highly successful, since Dunkin’s and the quirky brewery are coming out with a selection of three new Beers based on Dunkin’ Doughnut flavours for fall. The Dunkin’s Dozen features ‘smorgasbar’ (our own new word!) of Harpoon Dunkin’ Pumpkin (Spiced Latte Ale), Harpoon Dunkin’ Boston Kreme (Creamy Irish Stout), and Harpoon Dunkin’ Jelly Donut (Hazy IPA). I’ve been a fan of Beer with Doughnuts, but there must be lots of those folks out there… Where Harpoon Beers are sole, for a limited time.

The new Peanut Butter Cup taste-alike Cake treats consist of a bottom layer of Chocolate Cake topped with a layer of Peanut Butter Creme, all wrapped in Chocolate. They come in 2-packs like PB Cups and will be available everywhere you expect to find regular Reese’s Snacks by the end of the year.

… On what will be making many of us fatter over the coming days, weeks and Fall months as we continue to rely on hand-held snacks waiting out the COVID-19 crisis. See you back here in 7 with another, new edition of Fast Food Week!