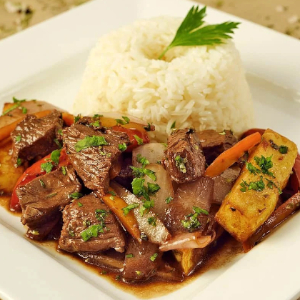 Expedition To Peru: Amazing Diversity – From Sky To Sea!

What do you think of when you think of Peru? The ancient Incans and their mountain-top cities? Lush jungles full of exotic birds and animals? Ultra-modern ‘world cities’ like Lima, which showcase the best that South American cuisine has to offer? From now on, I want you to think ‘potatoes’… 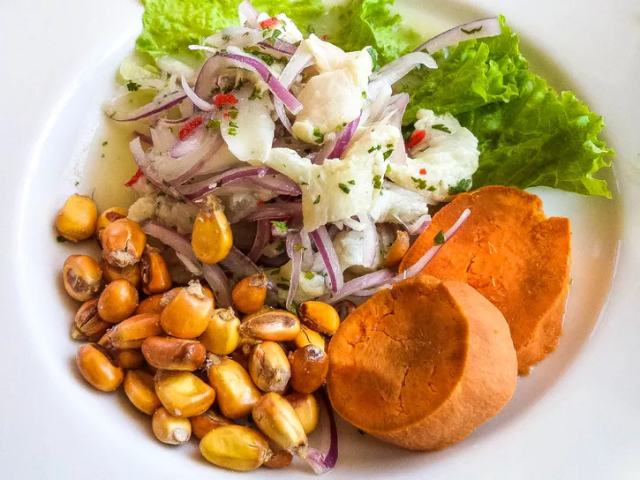 Yes, potatoes. Those among you who have practiced a little food scholarship will already know this, but Peru is the home and native land of the potato. Spanish explorers brought them back to Europe and they spread to all corners of the continent from there. Peru, in fact, boasts some 3,800 varieties of potatoes, mainly grown at higher altitudes. Lower down, there’s a tremendous variety of produce in the mid-altitudes including corn, which has been consumed by Peruvians for millennia. And, at sea level, there’s a thriving seafood-based cuisine fed by the ever-present Pacific Ocean.

A standout player in Peruvian cuisine is, of course, the native Aji Chili which shows up all over the menu, often in sauces.

And, amid this riot of culinary diversity, there are a few surprises which will either amaze or disgust you!

Ceviche: As in other cultures that have a close relationship with the sea, Peru’s coastal cuisines include its own version of Crviche – raw fish salad. As in other variants, the raw fish (traditionally Sea Bass) is ‘cooked’ (marinated) in highly acidic citrus juices mixed with onions, salt and chilis. Typical sides include boiled corn and puréed sweet potato. And something you’ll find in a lot of Peruvian dishes: Roasted corn kernels (remember that trendy 80s snack, Corn Nuts?) are often sprinkled round the plate, adding a unique crunchy note to the repast. Many Peruvians consider Ceviche their national dish!

Causa: Salad or casserole? That’s a question that may never be conclusively answered concerning Causa, a traditional Peruvian terrine. It starts ( as so0 many other Peruvian dishes) with a layer of mashed golden Peruvian potatoes mashed with lime juice and oil, topped with a layer of tuna, salmon or chicken shredded and mixed with mayo and aji chili sauce. 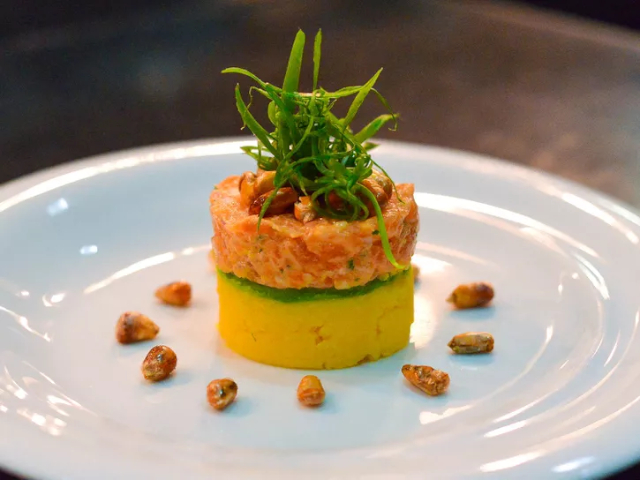 Layers of mashed avocado, chopped hard boiled eggs and olives often follow. Then the whole thing is capped off with more of the potato mixture. It’s served cold, as a salad or a side.

Pollo a la Brasa: This ‘rotisserie’ chicken is probably the best-known Peruvian dish to may folks who are lucky enough to have a Peruvian restaurant in their neighbourhood. Whole chickens are marinated in garlic, herbs, and spices before long-slow roasting on a spit. It’s traditionally served with green huacatay, a sauce made with Peruvian Black Mint, cilantro, garlic and chili in a mayo base. This is one of those ‘delicacies’ you’ll either love or hate – there’s no in-between.

Arroz con Pato: ‘Duck with Rice’ is a classic Peruvian dish reflecting the country’s Spanish influence. The Rice – get ready – is cooked in dark beer flavoured with cilantro and herbs giving it a uniquer earthy presence. Disjointed duck is featured, prepared en confit, and seared to a crispy finish. This dish is a favourite all over Peru and can be found regularly on family dinner tables. The preparation is so beloved that folks make it with chicken and whatever other kinds of poultry they have to hand.

Lomo Saltado: An hands-down favourite among Peruvins of all stripes. Lomo Saltado has its roots not in the ancient Incan or Spanish traditions, but in China (see photo, top of page). Migrant workers who came from Asia in the 19th century brought techniques such as stir frying and ingredients such as soy sauce, and their inputs quickly became integrated in Peruvian cuisine. Thin strips of beef are marinated in soy sauce, then stir fried with onions, tomatoes, chilis and spices. Lomo Saltado is traditionally served with potatoes (often French Fries – yet another outside influence!) and a side of plain rice. 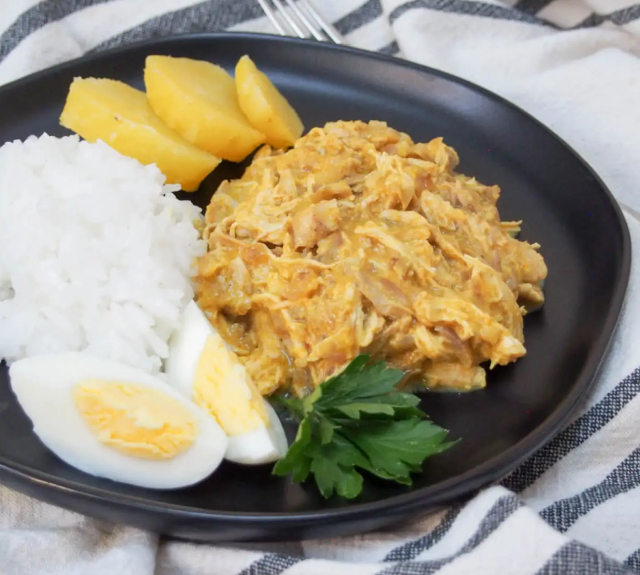 Aji de Gallina is usually served atop rice or boiled potatoes with fresh veggies on the side. This is a relatively quick and definitely easy dish to make; especially if you have some leftover Pollo a la Brasa to use up!

Some readers may find the following iconic Peruvian dishes just plain yucky or even downright disgusting. Proceed at your own risk!

Anticuchos de Corazón: Grilled (Beef or Alpaca) Heart is a traditional dish that really deserves your attention, if you can get past the idea of eating ‘heart’. Heart promoters insist that the meat is richer and beefier tasting than ribeye. The meat is customarily cut in 2 in. / 5 cm cubes and marinated in vinegar, cumin, aji, and garlic. It’s then grilled over a charcoal fire until medium rare. The meat cubes are often skewered, like kebabs, with pieces of onion and potato, and drizzled with lime juice before serving.

Cuy: Sounds innocent enough, but this is the Peruvian (Spanish) word for one of the country’s most eclectic and culturally defining dishes: Roasted Guinea Pig. We’re told that Cuy is the second-most-popular meat in the high mountains of Peru, after Alpaca. 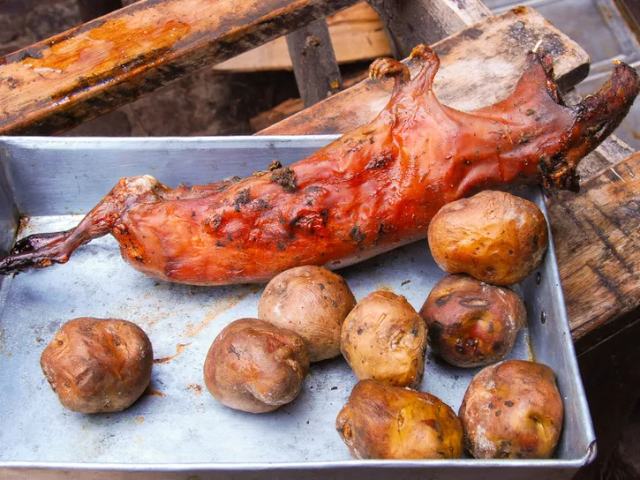 One reference we encountered suggests: “Just imagine you’re eating a single-serving roast suckling pig or roast chicken.” Or rabbit, perhaps. The critters are gutted, stuffed with ‘local herbs’ and roasted over a wood fire. The skin comes out bronzed and crispy. When served disjointed, you can pick up a leg or a thigh and munch on it just like you would fried chicken. Add a dash of aji sauce to give this rich, deeply flavoured dark meat a bright counterpoint.

Just the quickest of overviews

2021-06-07
Previous Post: Sunday Musings: Why is Diabetes Still A Scourge?
Next Post: Expedition to Chile: Beef And Pork Reign Supreme!