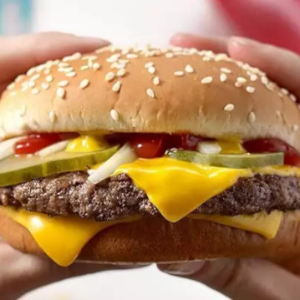 By: Maggie
In: Comfort Food, Foodie Life Lessons
With: 0 Comments

Really, it’s an academic head-to-head in which two noted food and diet researchers present opposing sides of the Processed Food argument. And, taken at face value, both of their stands are convincing. But I say there’s clearly more to the question than that. And I’ll use a ‘burger’ example to demonstrate… 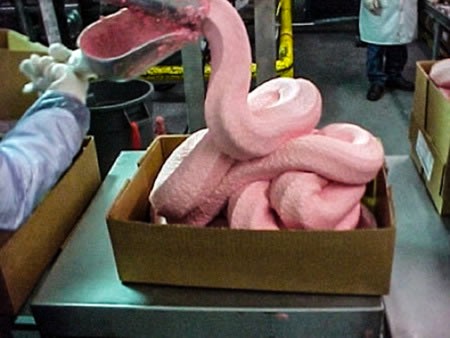 Raw Pink Slime: You’d never use it at home in place of real ground
beef – would you? The epitome of ultra-processed food…

Carlos A. Monteiro, MD, PhD, of the University of São Paulo in São Paulo, Brazil, and Arne Astrup, MD, PhD, of Novo Nordisk Foundation in Hellerup, Denmark, are usually considered level-headed, serious scientists out to follow the clinical and experimental evidence to logical and definitive conclusions. But when The American Journal of Clinical Nutrition (AJCN) asked them to take sides in a debate over the potential harm versus good of ultra-processed foods in your diet, they forced themselves to polarize their views.

The debate is actually about the NOVA classification system that rates foods on a scale from unprocessed or minimally processed to ultra-processed, based on the degree of industrial manipulation they undergo during manufacturing.

According to an abstract of the arguments for and against, “NOVA defines ultra-processed foods as those made using sequences of processes that extract substances from foods and alter them with chemicals or additives in order to formulate the final product. Ultra-processed foods are characteristically designed to be cheap, palatable and convenient; examples include soft drinks and candy, packaged snacks and pastries, ready-to-heat products, and reconstituted meat products or plant-based alternatives.”

“Clearly, many aspects of food processing can affect health outcomes, but conflating them into the notion of ultra-processing is unnecessary, because the main determinants of chronic disease risk are already captured by existing nutrient profiling systems,” wrote Astrup. “The NOVA classification adds little to existing nutrient profiling systems; characterizes several healthy, nutrient-dense foods as unhealthy; and is counterproductive to solve the major global food production challenges.”

I want to expand on (annotate) a comment by Astrup justifying his claim that the NOVA system doesn’t improve on existing methods of rating foods.

The abstract cites popular burger joint menu items as examples of foods that are considered ultra-processed when they come from a Fast Food kitchen, but rate much healthier when prepared at home:

“Astrup contends that unhealthful foods like fries, burgers and pizza would be considered ultra-processed if purchased from a fast-food restaurant but minimally processed if made at home with similar ingredients.”

I guess NOVA system users take into account that the foods aren’t heavily processed when you make them at home, and aren’t doped with preservatives, artificial colourings and other additives.

And I can’t help but harken back to the great Pink Slime ‘scandal’ of 2012, when animal rights activists and health advocates ‘revealed’ the grim secret of what went into certain ‘all beef’ Fast Food treats. Some called it ‘Slimageddon’.

‘Pink Slime’ is what the protesters called the substance officially known as Lean Finely Textured Beef (LFTB), which is actually slaughterhouse trimmings mechanically-de-boned and de-fatted, pulverized and treated with an ammonia product to maker sure any germs present are killed and to give the ‘product’ a longer shelf life.

Fast Food chains scurried to drop Pink Slime from their ingredient lists (or at least said they did). And the uproar died down. Until it was discovered, in 2014, that certain fast food brands were once again ordering LFTB from slaughter houses.

And BTW: Did you know that Chicken menu items like the McChicken Sandwich and Chicken McNuggets are also made from mechanically-de-boned meat?

You might already have guessed, I come down squarely on the side of Dr. Monteiro in the NOVA/Processed Food debate. And, considering the evidence to the contrary, I have to admit I admire Dr. Astrup for stepping up to defend what I consider a hopeless proposition.

No significantly-, much less ultra-processed foods for me!