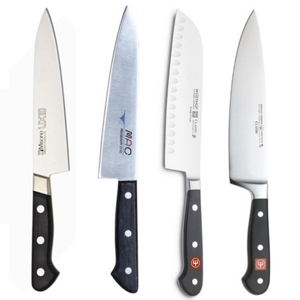 Choose The Right Chef’s Knife For You!

It may seem pretty simple, choosing a Chef’s knife. but I think it warrants a close look since this one blade will be your best buddy in the kitchen for the rest of your cooking life! And, today, we really do have a much wider range of blade shapes and sizes than Chefs did even twenty years ago!

Let’s look at the pros and cons…

…Of the various kinds of chef knives available today.

This is the profile we all think of first when we think of a ‘Chef’ knife: A flat blade with a fairly straight upper edge and a very curved lower edge, meeting in a very sharp point. You can do just about any knife-work job with this versatile, classic French design. The curved underside lets you rock the knife for mincing and repetitive tasks such as slicing Carrot Coins.

A different take on the all-round cooking knife, this style is better suited to classic Japanese dishes, many of which involve Fish and thinly-sliced Meats. The Japanese Chef Knife is often longer in the blade than the standard French pattern Chef and shallower from top to bottom. That’s what they sometimes refer to as a Sushi knife. In the tradition of Japanese Samaurai Sword, they are always very sharp.

A variation on the classic French Chef Knife, this Japanese blade features a modest curve on the bottom edge and an ‘eagle’s beak’ down-turned point. !t’s favoured by many cooks who prefer the less-drastic curve on the cutting edge and still want a deep-heeled profile for strength.

All ‘Cleavers’ are not created equal. A real Cleaver has a battleship-prow nose and, traditionally, a hole is bored through the upper front corner of the blade to allow it to be bolted to a fixed bracket on the cutting bench to amplify leverage for tough cuts. They also tend to be large and heavy, which also helps with the tough cuts.

Also known as Chinese Cook’s Knives, these slicers look like small, delicate Cleavers and can be used for many of the same tacks. Their hallmark job is hacking chickens into the small pieces Asians prefer. But they are also used for almost every knife-work job by skilled Asian cooks who master using the big square – but thin – blades for everything from the aforementioned Chicken hacking to slicing veggies and meats ultra thin for lightening-quick Wok frying. Chinese Choppers are usually very, very sharp and should be honed often to maintain their fine edges.

There you have it. I’ll take questions from the audience, now…