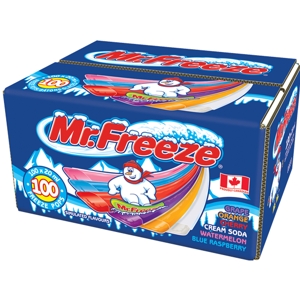 Now and then, you hear about hijackings – the theft of whole truckloads of goods which end up on the Black Market. And who hasn’t heard about someone who got a great deal on something that ‘fell off the back of a truck’? But do you have any idea how much that costs the economy? 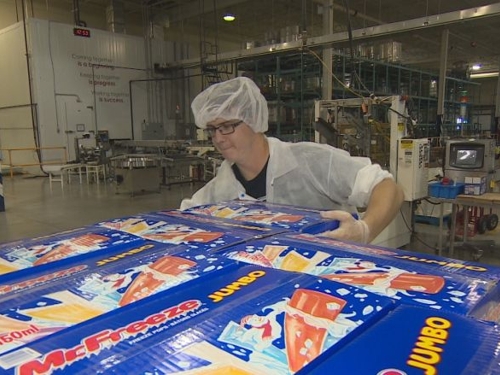 Freezies ready for shipping. Two truckloads were hijacked in North Toronto recently.
The police Cargo Theft Unit got ’em back. Only one truckload was fit
to put back in inventory. Not a total loss, but…

A couple of weeks back, we heard about the hijacking of a whole truckload of Nova Scotia Lobster worth (C)$15,000. More recently, two truckloads of Freezie pops – water, colouring and flavouring in a plastic sleeve – disappeared on route from the manufacturer to the distributor. That loss was toted up at (C)$60,000. And that, we’re told, by the Ontario Trucking Association and police forces, is just the tip of a (C)$5 billion a year iceberg.

Goods with no serial numbers – like cases of produce and flats of Berries – are essentially untraceable. That makes them especially easy to sell on the Black Market. High-value items such as Meat are similarly easy to dispose of. In fact, says York Region Police Det. Sgt. Paul LaSalle, a member of that force’s Cargo Theft Unit.

Cargo theft is going high-tech, now, LaSalle reveals. It can be something as low-tech as a phony haulage company bidding for loads of the right kind of cargo online, hitching up and driving the goods off into the great grey beyond. Or, it can be as high-tech as big theft rings hacking into shipping company computers to target the most valuable, easiest to ‘fence’ loads.

How can you tell if those deep-discount Strawberries are legit or Black Market? You can’t. But you can take comfort in the knowledge that major supermarkets don’t buy off the Black Market. indeed, they have detailed, firm agreements with their suppliers for large amounts of Meat, Fruits and Veggies, based on what’s in season where at any given time of year.

What about corner stores? Independent markets? Restaurants upon whose back doors anybody with food to sell may knock? They are among the major markets for stolen food products. And there’s apparently no way to stem that tide. A multitude of small cash transactions at myriad locations, impossible to trace.

On the other hand, what restaurateur these days would balk at the offer of cheap food? And, if that helps keep menu prices down, who among diners would quibble? Especially since their consciences are clear, thanks to the lack of proof that they’re using and eating stolen goods?

It’s a real problem and it isn’t a victimless crime. In fact, we’re all victims. When the insurance companies that underwrite cargoes which are hijacked want to recoup their losses, they increase their rates and we all pay more, in the end.

Just thought you should know.