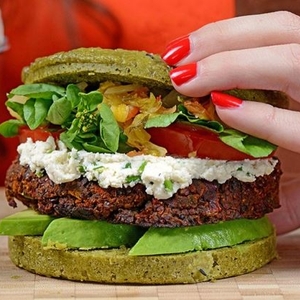 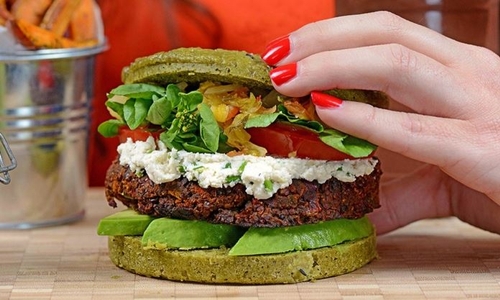 The Nutri-Burger, commissioned by Groupon – to generate interest
in some of its more exotic items?

The 56-ingredient Nutri-Burger, designed by nutritionist Libby Limon, was commissioned by the couponing website Groupon. Groupon didn’t say, upfront, why it embarked on this loony endeavour, but it’s clear, from the context on their own page that was conceived as a cunning way to showcase some of the ingredients listed on Groupon whose coupons don’t get downloaded that much. Or at all.

You can view the entire ingredient list here. You could also see it at Groupon, but you’d have top join Groupon first, to get access – another indication that the Nutri Burger thing is little more than a marketing poloy. 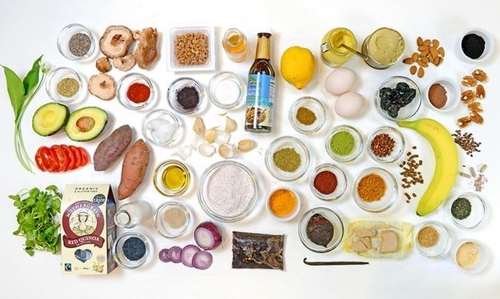 The complete Ingredient list for the Nutri-Burger Meal. I calculate it would cost
something like (US)$300. just to buy the ingredients. You have to enter
some sort of draw to qualify for a ticket to an official Nutri-Burger
taste test at a trendy London Pub. And, presumably,
you have make your own way to England.

I know, you point out: There are only 56 ingredients on the list. I feel compelled to include the heavy-duty toothpick they use to hold it all together. The dish just wouldn’t work without it. And I like nice round numbers.

Going down the list, you note: Sweet Potatoes in a Burger? Frozen Bananas? Bee Pollen? Avocado Oil? Well, the Burger is just part of the uber-healthy meal. There’s also an exotic shake featuring ‘activated’ Nuts and Cocao, Sweet Potato Fries and a Pale Green Dipping Sauce which is not elaborated upon.

What’s so great about it?

Aside from being crammed full of ‘healthy’ ingredients, a lab (also commissioned by Groupon) found that the meal is sky-high in anti-oxidants. You’d have to eat almost 3.5 lb. / 1.5 kg of Blueberries to get the same benefit. Or 6.6 lb. / 3 kg of Broccoli. As well, it contains 100 per cent of your daily recommended allowance of Fibre, Vitamin A, Vitamin C and Iodine. It’s also ‘rich’ in B Vitamins, Vitamin E, Vitamin K, Magnesium, Potassium, Selenium, Choline and Zinc. Got an intolerance? It’s Gluten, Dairy and Meat Protein free. Oddly enough, however, with all that detail on the one hand, there’s no mention of the meal’s total Calorie count. I’ll bet it’s somewhere north of your total recommended intake.

The question is, would you ever order one, much less attempt to make one at home? I wouldn’t.

First, the flat, dense-looking pea-green Bun is definitely off-putting, just to start with. The odd, grainy, white, mushy sauce in the middle isn’t Horse Radish and has no right to masquerade as that venerable ingredient. The Burger Patty, itself, looks dry, to the point of being downright woody. The colour is anything but appetizing. It says ‘Saddle Leather’ to me.

Two things I really like are the thick slice of Tomato and the abundant Avocado.

No Nutri-Burger for me, thanks. And I can’t recommend it to my food-loving followers, either. It’s nothing more than a totally-over-the-top attention-getting ploy. And a new champion in the Menu Madness Sweepstakes.