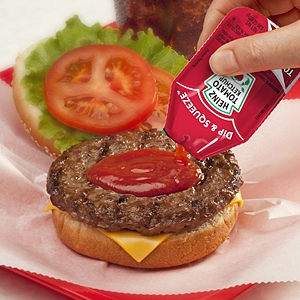 A tractor trailer carrying bulk containers of Mayo, Salad Dressings and other Condiments crashed yesterday at the busy interchange of the Don Valley Parkway and Highway 401. The scene looked like an out-take from the new Ghostbusters movie, with Green (Goddess) ‘slime’ everywhere… 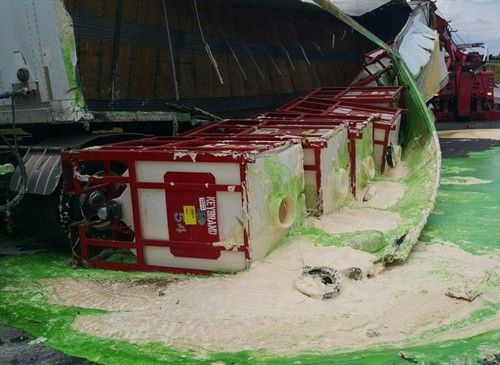 The remains of a tractor trailer load of bulk condiments after the vehicle rolled over
on a tightly curved ramp at HWY 401 and the Don Valley parkway,
in Toronto yesterday. Oh, the humanity!

The big plastic tanks were probably on their way from the manufacturing plant to another location where they were destined to be bottled or squirted into little plastic single-serving restaurant packs. No word on how much goo spilled, but the shipment is described as a total loss. Looking at the tanks, you’d have to estimate the volume at tens of thousands of litres.

The truck driver suffered only minor injuries, but was charged with careless driving. I wonder if he knew his load was really, really top-heavy? Those tanks are mounted on metal stands that place the weight of their cargo several feet above the ground – or trailer floor, in this case. A disaster waiting to happen!

The trailer was destroyed.

Will this incident result in a critical Mayo shortage at one or more of your fave Fast Food joints? Probably not. They’re making and packaging this stuff every day, almost in a constant stream, because diners go through so much of it.

Will the driver lose his job? Probably.

Will that intersection ramp remain a slippery mess for days, perhaps weeks to come? Maybe. At least until the first really hard rain.

Will the photos taken by OPP Sgt. Kerry Schmidt go viral? Already have.

Now, back to our regularly-scheduled food blog…