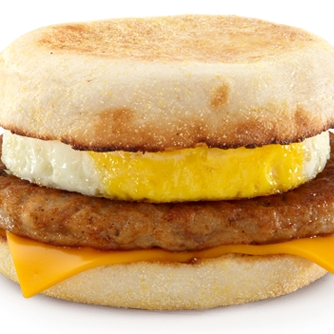 While McDonald’s ponders offering All-Day Breakfast, competitors are already pushing the breakfast envelope. And the Breakfast Sandwich niche, in particular, is showing amazing growth in Canada as all the players try to figure out perfect combination of Bun, Egg, Meat and Cheese… 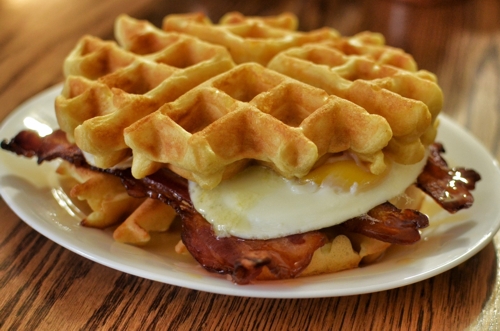 The height of decadence? An over-sized, Belgian Waffle-based Bacon, Two-Egg and
Cheese Breakfast Sandwich. The Phenomemon has spread far beyond the
Fast Food sector!

So I was reading this post on Yahoo! Finance about the amazing explosion in the popularity of Breakfast Sandwiches over the past few years and I wondered… What is it about these yummy little fistfulls that makes them so irresistible?

Of course, there’s the unbeatable combo of Bacon/Ham/Sausage and Cheese, which screams ‘Breakfast’ to the vast majority of Canadians out there. And there’s the Egg, which – even standing alone – is an almost universal Breakfast icon across Western Cuisines. Perhaps the choice of English Muffin, Burger Bun, Biscuit, Bagel or even a Croissant – depending on which purveyor you patronize – make the Breakfast Sandwich desirable to so many morning diners.

One thing is certain: The Breakfast Sandwich is big, big business! In fact, a recent study revealed that Canadians ate more than 480 million of the things in the past year. That’s an average of more than a dozen per Canadian per annum!

The Breakfast Sandwich craze all began with an inspiration that came to McDonald’s franchisee, retired U.S. Coastguard officer Marion Taylor Tilghman (1929 – 2011), who had made what we now call an Egg McMuffin during his Coastguard days and thought it might appeal to McDonald’s burger-oriented customer base – ‘Breakfast on a bun’.

That was 1972. Tilghman suggested the new menu item to McDonald’s President Ray Kroc who agreed that it was, “…a crazy idea.” But he also saw that, “the Egg McMuffin opened up a whole new area of potential business for McDonald’s, the breakfast trade.”

And, as it turned out, the McMuffin ended up opening a whole new area of competition across the Fast Food sector!

Whose breakfast Sandwich is best?

I’ve tried them all and I have a definite, personal preference for the A&W version of the breakfast Sandwich. It’s bigger than most of the others and I can get it on either a burger Bun or an English Muffin. the thing has a  pleasing mouth feel – no part of it too tough, too crunchy or too mushy – and it’s the least greasy of all the Breakfast Sandwiches I’ve had.

The Tim Horton’s Sandwich is good, too, but for the fact that it’s a little smaller (to my eye) than A&W’s and a little greasier, which seems to mask the flavour of the Egg on my palate.

The Starbucks’ version of the Breakfast Sandwich is lovely but pricey and, as such, is in a class by itself. It’s not the Sandwich I’d grab on the way to school or work. It’s more for that leisurely Sunday morning nosh, accompanied by a copy of the New York Times and a $5 cup of coffee.

And what of the original Egg McMuffin?

Alas, it’s my least favourite Breakfast Sandwich. I’ve always found the McMuffin the most greasy of all the Sandwiches in its class and not as big as some of the others.

I’d also like to stress, at this point, that I’ve made no effort to do a scientific analysis of Breakfast Sandwiches. If I had the time, money and lab resources to do it, I’d like to measure, weigh and otherwise quantify all aspects of the leading breakfast Sandwiches and rate them objectively. My ratings as presented in this post are simply based on my own subjective observations. But how else do most diners decide which Sandwich they’ll buy? It’s all subjective on the front lines…

Until recently, a side issue played a big part in my choice of Breakfast Sandwich. That issue was the size flavour and greasiness of the Hashbrown patty offered as an adjunct to the various Sandwich selections. At first, McDonald’s offered a very small patty, more like a Spud McNugget than a Hashbrown, really. Then Tim’s got into the game and went significantly bigger with its Hashbrown. And, finally, A&W came in with an even bigger Hashbrown. Today, however, all the breakfast Hashbrown patties out there are more or less equal, at least in terms of the amount of Potato you get for your investment.

If the Breakfast purveyors could just agree on standard sizes with standard names for their Coffee cups!