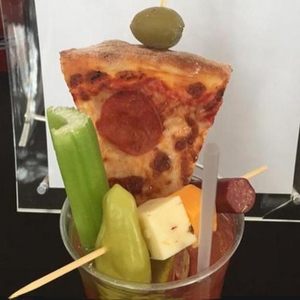 We’ve been reporting them piecemeal as they’re announced, but Yahoo! has graciously provided it’s overview of the Top Ten New Ballpark Foods of the 2015 season. Among them are a couple you’ve already seen, but the majority are new to the FFB and some will amaze you! 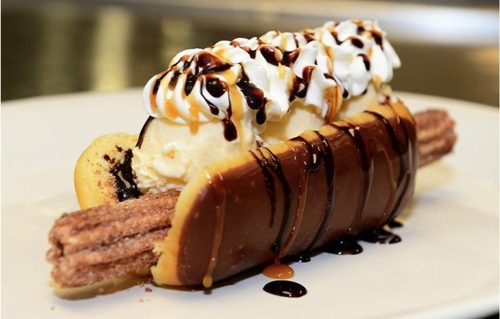 The decadent Churro Dog dessert. A Sundae on a Doughnut in an Éclaire.

You’ve already been warned about the Churro Dog, actually a dessert composed of three scoops of Ice Cream topped with whipped cream and chocolate sauce on top of a Churro Doughnut in a Chocolate Éclaire ‘bun’. And just last week we told you about the Houston Astros’ Chicken & Waffle Cone.

Just the tip of the foodberg…

Now, we learn that there are some 2015 season offerings that are even wilder and dietarily less wise:

There’s the Nachos on a Stick from Milwaukee Brewers: A pair of skewers loaded with Fajita Beef, coated in Refried Beans and rolled in Corn Chip crumbs before being deep fried.

And there’s a Banana Split in a Batting Helmet in Chicago.

The Minnesota Twins are featuring a College Days Bloody Mary: The usual Mary with a stick of Celery – and a slice of Pizza, Sausage, Cheese, Pineapple and a whole spicy Pepperoncini!

And the Triple Triple Way Back Burger (6 patties with Cheese, Tomato and Lettuce) in Phillie comes in at an astounding has 5,100 calories and 117g of saturated fat (10 times the recommended daily allowance).

So go to the Yahoo! page and gorge yourself – vicariously, at least. It’s healthier that way…