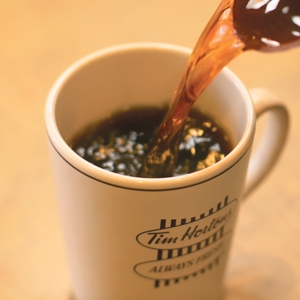 If you thought Tim Horton’s was going to suspend new-product roll-outs and cut back in every conceivable way under the ownership of Burger King / 3G Holdings… Well, I did. And now I have to give it another think. Tim’s this week announced they’re introducing a new Coffee this month… 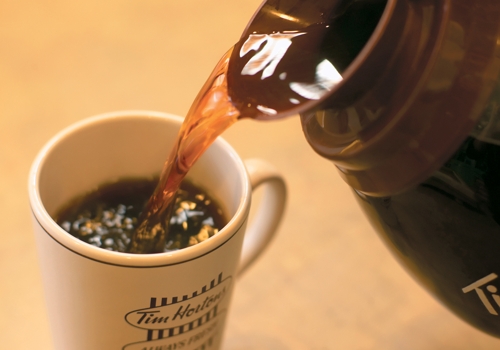 The iconic Tim Horton’s stoneware coffee mug with the ‘retro’ logo… Soon, you’ll be
able to get one filled with a single-region sourced Colombian blend,
part two of the ongoing Tim’s Coffee diversity roll-out!

‘Dark Roast’ was the first departure from Tim’s signature medium roast java since the company poured its very first cup back in 1964. Then came the shock and speculation accompanying the announcement that Tim’s – a Canadian icon – had been bought out by Burger King – an American icon – which was already owned by 3G Holdings – a Brazilian icon…

The expected layoffs and cuts were quick to come, as is the pattern when 3G and Berkshire-Hathaway (i.e.- Warren Buffet) take a company over. And many observers – yours truly included – forecast service streamlining and other astringencies which, in the least, would preclude any menu innovation in the near future.

Tim’s has announced that it will launch a new medium Roast Colombian coffee blend called Three Peaks Premium almost immediately in a number of selected markets in Ontario.

This is just the latest volley in the fast food Coffee war that erupted when McDonald’s became the fist player to defy Starbucks, Second Cup and that upscale crowd by improving their daily coffee. They actually gave it away for months to get folks to try it. That led to similar moves by other players, one of which was the launch last year of Tim’s Dark Roast.

All this can only mean good things for consumers. Although, with Coffee prices in general rising sharply, and these new improved blends undoubtedly costing more than the previous, less ‘premium’ ones, retail prices are sure to rise.

Here’s something restauranteurs know and you probably don’t: The cup of coffee you pay $2.50 or more for actually costs the restaurant about a nickel to make! In fact, beverages, as a class of menu item, make more profit for restauranteurs than any other type of item they sell. That’s the secret behind the move, by some joints to offer pour-your-own soft drink service, often with free refills. They’re still making money hand-over-fist.

So… Coffee prices need not rise even if the price of a pound of ground coffee paid by the restaurant goes up considerably. Alas! profit margins on other menu items are so slim that, sometimes, beverage profits can be the difference between a good month and a bad one for any restaurant.

Trust me: You don’t want to be a restaurant owner at this point in history…