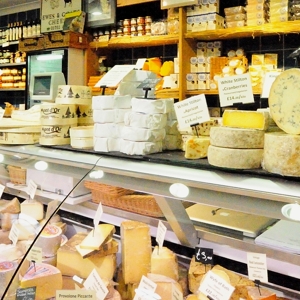 Are You a Cheese Addict?

A new study, the results of which have just been released by investigators at the University of Michigan, clearly indicates that Cheese is addictive – as addictive as crack cocaine, some folks claim. And scientists also note that Milk products pose a two-pronged threat to our self-control systems… 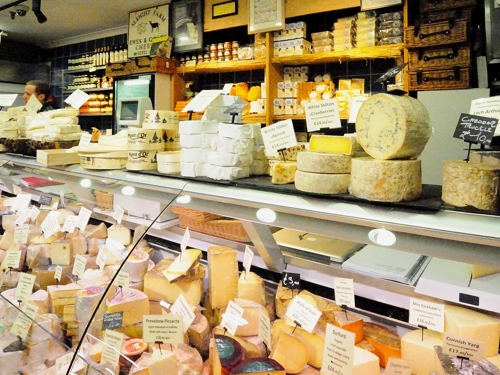 A jolly olde British Cheese shoppe: Where the locals get their fix…

The study looked at 35 common foods – many of them fully or partially processed – to see which were rated most desirable (addictive) to a randomly-chosen group of eaters. Fortunately, there already exists a scale by which addiction to a given food can be measured. By having study subjects complete the scale questionnaire for all 35 foods, scientists built a data base of foods with known Fat content, both naturally-occurring and processed. From that, they rated the 35 foods from least to most addictive.

First of all, researchers confirmed that, the Fattier the food, the more addictive it is. In an earlier post, we explained how early man’s unpredictable access to nutrition-dense foods may have gotten us wired to eat as much fat and protein as we can when we have the chance. A survival instinct.

As we explained in an earlier post, some foods that are high in Fats and Sugar can have the same effect on the brain as addictive drugs, like morphine and cocaine. Thus was validated the old term ‘Sugar high’. Oreo Cookies were singled out in that study as particularly addictive…

But this latest study also found that a substance naturally found in Milk products can be turned into an opiate-like drug during digestion… It’s called Casein and the ‘drug’ it forms is formally known a Casomorphin. Whoa!

Not only that, but Casein is usually present in larger quantities in processed products, like Cheese. particularly Processed Cheese.

Remember when we told you about Processed Cheese?

Processed, or ‘American’ cheese is a uniformly Orange, uniformly textured, uniformly uniform product made by cooking ends and trimmings of real Cheddar Cheese (and others, too) with Vegetable Oil, colouring and Milk Solids. It’s favoured across the western world by fast Food joints for its meltability and reliable flavour. But here’s the thing: Those added milk Solids contain a relatively high percentage of Casein, on top of the base Cheese’s natural casein, and that makes your everyday slice the most addictive thing on any plate!

All that said, it should come as no surprise that Pizza topped the list of foods used in the Michigan study as most addictive. likewise, some limited, unscientific inquiries of my own disclosed the following:

And that’s just the beginning…

So go on and enjoy your Cheese! As addictive as it may be, it’s also a great source of essential nutritional elements and tons of fun to eat!