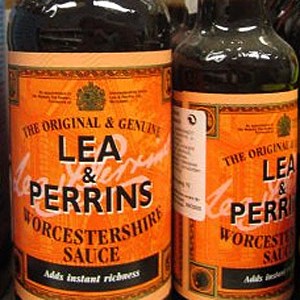 That’s the way it’s supposed to be pronounced. There is no “Chester” (or “Cester”) in “Worcestershire”. The quirky condiment is actually named after the County in England in which it is said to have been invented. 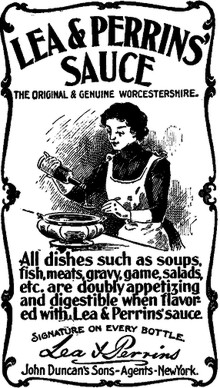 Believe it or not, the story goes that dispensing chemists J.W. Lea and W.H. Perrins first introduced Worcestershire Sauce commercially in 1837, under a label proclaiming it “The Original & Genuine Worcestershire,” and boasting in their ads (like the one reproduced at left) that, “All dishes … are doubly digestible and appetizing when flavoured with Lea & Perrins’ Sauce.”

Like many Spice, Herb and related concoctions of the time, it was originally marketed not only as a flavouring compound, but as an aid to digestion. Nevertheless, it caught on fast as a flavour enhancer and spawned a crowd of copycats.

Lee & Perrins didn’t invent the stuff, though. The most reliable version of the origin story has it that either the 2nd or 3rd Baron Sandys of Worcestershire, England, brought the recipe back with him from India where he was stationed as a diplomat in the early 19th century, and handed it down in the family papers. It was apparently a Lady Sandys of a later generation who found the recipe and asked Lea & Perrins to recreate the brew.

Making the stuff was not an easy job in 1837, though. We have a world of Herbs and Spices available to us today but, back a couple of hundred years ago, ingredients that were common in Asia were still relatively scarce and costly in Europe.

The Vinegar, Molasses, Salt, Sugar, Garlic and Onions in the Lea & Perrins recipe were fairly easy to come by, as were the Anchovies. Yes, Anchovies. Worcestershire is, first and foremost, a fermented fish sauce. More-exotic Asian ingredients such as Tamarind, Cloves and Soy Sauce round out the basic formula.

As Lea & Perrins found out the first time they mixed up a batch, the stuff is totally unpalatable at first. After a few months – or even years – of fermentation, though, it mellows and matures into the heady, savoury concoction we’re used to shaking out of that familiar little bottle.

Today, Worcestershire Sauce has made an important place for itself in many of our classic recipes.

I use Worcestershire sauce alone in Caesar Salad dressing. Worcestershire plus Anchovies, which are traditional, just seems like overkill to me. Worcestershire is also a favourite supporting player in many other Vinaigrettes and marinades.

You can’t have a real Bloody Mary without a couple of shakes of Worcestershire. There really is no substitute, even though the market is spattered with Worcester-wanna-bes. In fact, a dash of Worcestershire is included in so many cocktail recipes that no serious bar is complete without a bottle.

Welsh Rarebit stands above other such dishes thanks to the special zing of Worcestershire.

You can’t go wrong shaking a few dashes of Worcestershire into your Meatloaf, Beef Burger or Meatball mixtures. It’s a must in barbecue marinades and sauces across the U.S. and Canada, as well as in Cajun and Caribbean cuisine.

Worcestershire has spread well beyond the confines of the British Commonwealth and North America, however. In many other parts of the world, it’s known as “English Sauce”. Beef eaters (no pun intended) everywhere – lovers of all red meats, actually – have discovered how well Worcestershire complements their favourite protein.

Don’t try this at home

As I mentioned earlier, there are many so-called “Worcestershire” recipes on the Internet and in cook books. But there’s really nothing quite like the real thing, formulated with real Tamarind and lovingly fermented in ideal conditions at the original Midlands Road plant in Worcester, England, where they’ve made it since 1897.

In case you think I’m getting a little maudlin, let me cut the syrup and note that Lea & Perrins was acquired by H.J. Heinz, the company Ketchup built, in 2005. But we’re assured that nothing has changed in Worcester. Except that they’re selling more of the trademark sauce than ever before, all over the globe.

Dive into the Worcestershire pool!

Even though you’re already familiar with many of the classic applications of Worcestershire, I’m sure you can think of more. I’m wondering, right now, how a dash or two would go in what might be termed a “fusion” Mole Sauce…

And let me know where your explorations take you!