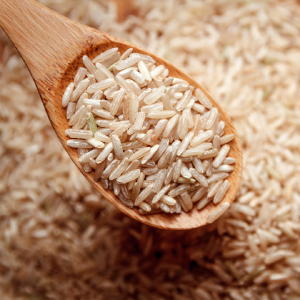 Why Brown Rice Is So Darned Good For You…

We’ve all been told, some of us for almost our whole lives, that brown rice is one of the healthiest things we can eat. Now, science says it knows why it’s so beneficial to our overall well being. But science has not gotten past the flavour and texture thing… 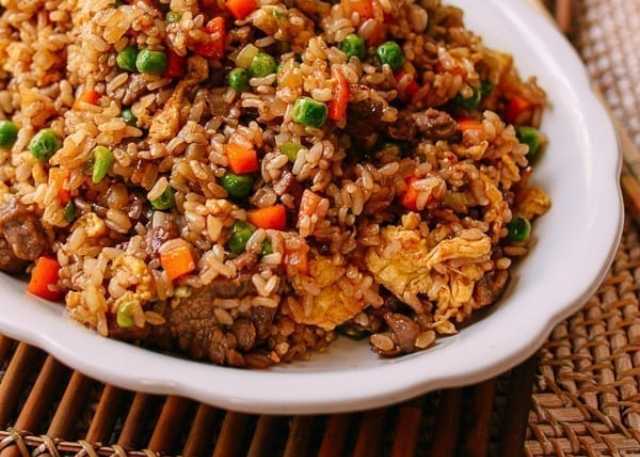 Fried Brown Rice: An example of the scrumptious things you can do with brown rice.
Add the green peas to make the dish a balanced veggie protein source!

A bowl a day doesn’t keep the doctor away (apple). It’s not nature’s most nearly perfect food (milk). It’s not The Breakfast of Champions (Wheaties).

But it is a powerful way to get your daily fibre and lots of other nutrients. Thing is, you have to keep the wrappings on. Not the outer-most chaff, mind you. But everything else. And that’s where some folks kiss Brown Rice goodbye. We’ll discuss taste and texture in a moment…

And it’s almost all in the outer components.

And now, researchers at Okayama University in Japan say some of the most important, and beneficial stuff may not be nutrients at all. Brown rice is also a rich source of phenols and flavonoids, powerful anti-oxidants that fight stress and inflammation. In turn, by fighting stress and inflammation, it can help mitigate a broad variety of major conditions and diseases including heart disease, type 2 diabetes and some cancers.

Sure, a lot of other foods contain phenols and flavonols, but they almost all contain stuff that’s bad for you, too. Like we said earlier, plain rice is an almost clean, white canvas, nutritionally. Except for modest amounts of other mostly good things. As well, Okayama researchers say, you’ll find you feel fuller on a smaller serving of brown rice than you’d need of white rice.

Like I said, there are lots of reasons to eat brown rice. Lots of reasons many diet counsellors have long recommended it as a part of a healthy diet.

Flavour, texture and other potential off-putters

I personally am used to the flvour of brown rice. It’s an acquired taste, sort of like wild rice. You might describe it as nutty, a little bitter around the edges, and definitely earthy. To me, it’s a great complement to the flavour of sweet veggies such as green peas and sweet corn. You can explore the universe of Brown Rice food pairings on your own time. One thing I particularly like is the texture of brown rice is, it does not have the often mushy, sometimes downright gummy texture of white rice. Try properly prepared brown rice and you’ll see what I mean!

Webmd.com has a concise, readable and useful post about brown rice that covers serving sizes, cooking techniques and so on…

2023-01-24
Previous Post: World’s Biggest Pizza Gets Even Bigger, Again…
Next Post: A Great New Way To Donate to Food Banks